Daytime wear is the subject of March 1815’s fashion plates, which feature  one walking dress and one morning dress. The walking dress (plate 13), departs from the previous two months’ focus on pale colors; our model here is decked out in a lush purple velvet pelisse, described as “evening-primiose-coloured.” Curled satin trim runs along each side of the front edge of the pelisse; tiny capes, “trimmed to correspond,” just cover each of the lady’s shoulders. An immense bonnet, styled “French,” looms over this wearer’s head, with an equally impressive ostrich feather topping it. I don’t imagine you would be hard to spot in a crowd if you wore that hat! 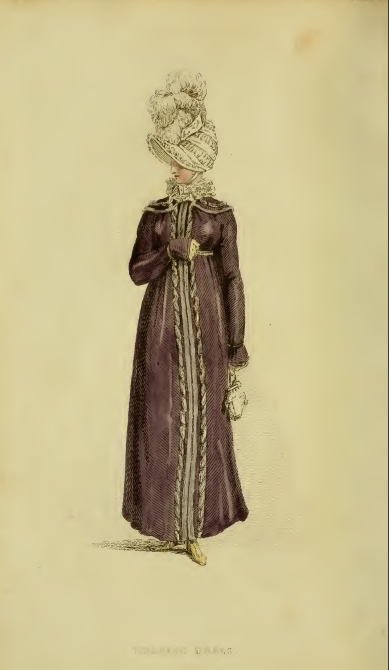 Plate 14’s morning dress is primarily white, but includes small touches of lilac to match plate 13’s evening primrose hues. A white petticoat trimmed with borders of needle-work is paired with a striped white spencer, tied under the bosom with “a bracelet” of unspecified material. It might simply be ribbon to match that adorning the wearer’s “melon cap,” coordinated to match the lilac kid half-boots. As in the past two months’ plates, this gown’s border, too, is a deep one. 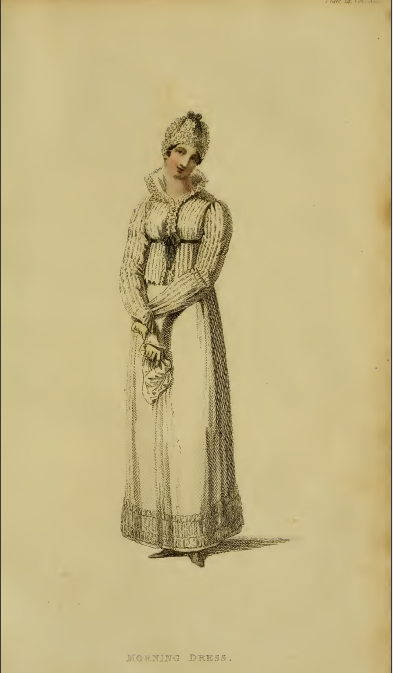 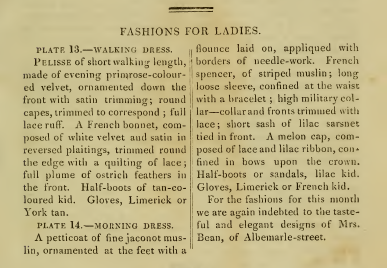 In addition to the fashion plates, this month’s Ackermann’s has the added bonus of a letter to the editor, with “Remarks on Female Fashions.” The writer mourns the disappearance from the pages of Ackermanns of Arbiter Elegantarium, who in earlier editions of the magazine offered fashion advice (and remonstrance) to the women of England. He also mourns the current trend for all things French (“that vortex of frippery, buffoonery, and extravagance”), which, due to the cessation of hostilities with France, threaten the “contamination” of English “good taste.” The writer has a special abhorrence for overly large hats (of the type featured in plate 13), and the move away from the simpler lines of dresses of the earlier Regency period, ones that more closely mirrored “the best ages of antiquity.” So amusing to read these deprecations against fashion, especially when placed right next to the plates that extol such dress! 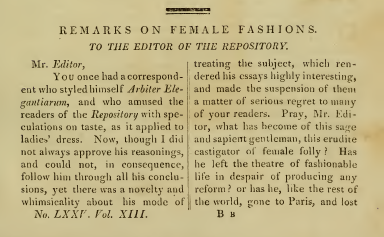 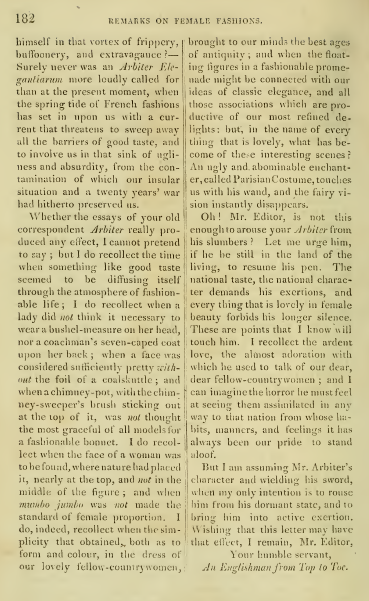 The magazine ends with several needle-work patterns for narrow borders or edgings. Perhaps some were used to make the embroidered embellishments on the flounce of the morning dress in plate 14? 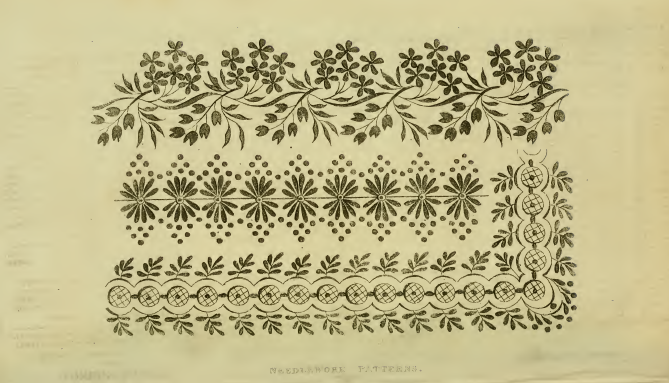