Unusual ornaments are what first catch my eye in November 1816’s Ackermann’s fashion plates. Plate 28 features a white Morning Dress shown from the back, which gives extra emphasis to two bright spots of color in the print: a silk handkerchief “thrown carelessly over the shoulders,” and a bright green parrot with a red cheek perched on the model’s hand. I’m guessing that the artist drew from imagination rather than an actual avian model, as I’ver never seen a green parrot with a bright red cheek; amazon parrots, which were apparently quite popular in 19th century England, had read heads, not cheeks, while the bright red cheek patch depicted here is more commonly seen on the grey-bodied cockatiel (my mom kept one when we were kids). I hope the lady doesn’t mind if the bird makes a mess of her lovely flounced gown… 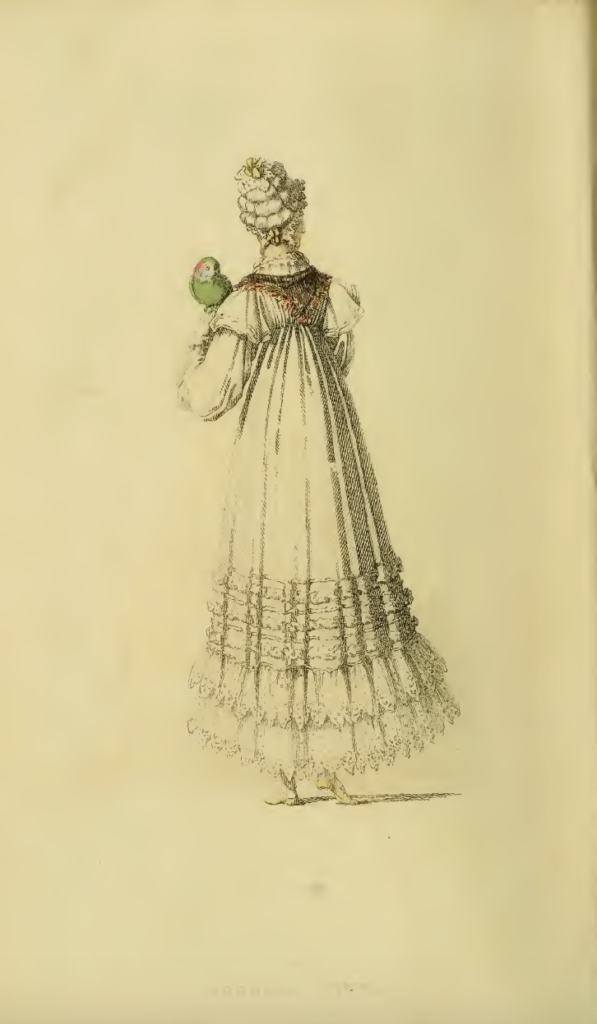 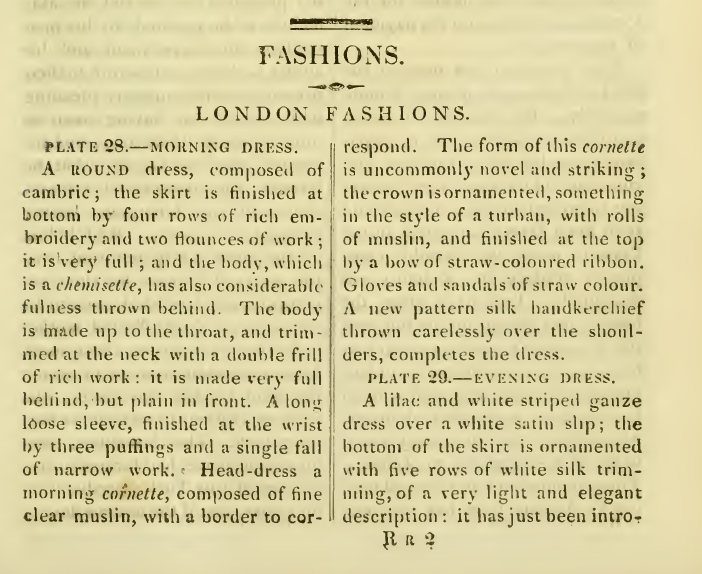 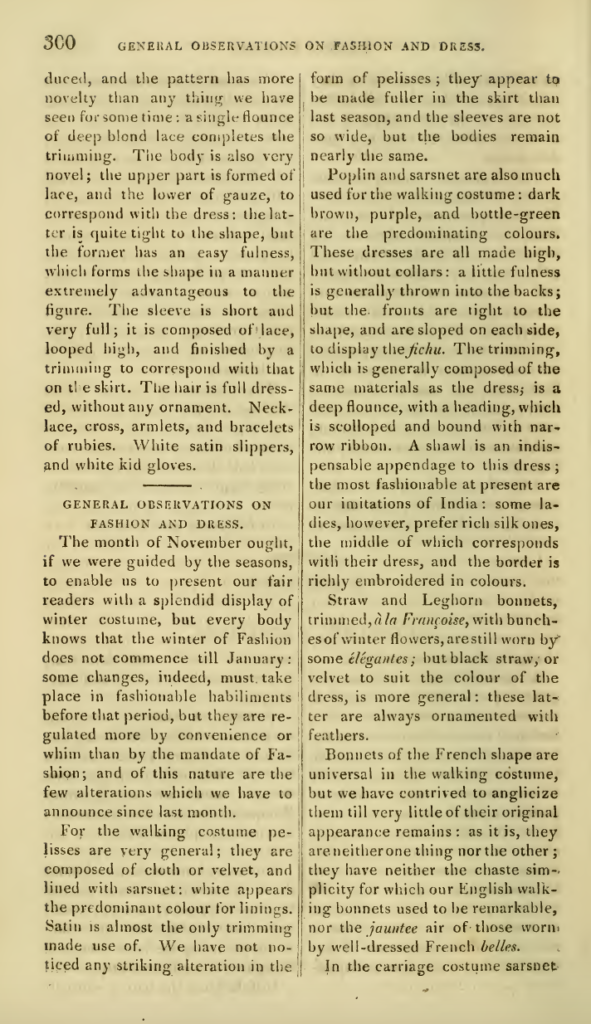 Plate 29, an Evening Dress of striped gauze, is unusual for its bodice, half gauze, half lace. But what really struck me in this print was the lady’s ruby ornaments: not only the usual necklace, cross, and bracelets, but two “armlets” which rest just below the edge of the puffed short sleeves. Not something I imagine one would choose to wear for an evening which included dancing; one wouldn’t want to spend one’s time pushing the things back up into position…

Both gowns continue with 1816’s trend of multiple frills and borders on the bottom of the skirt. The evening gown has not 2 or 3, but 5 rows of trim on the gauze gown itself, as well as an additional flounce of blond lace on its hem. 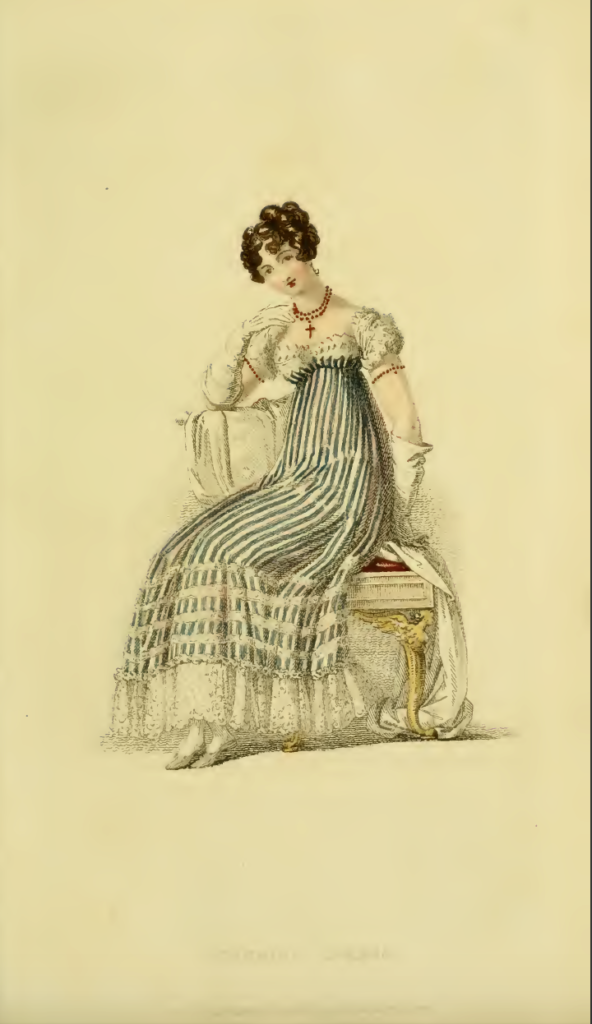 General Observations on English Fashion and Dress include the following:

• Walking costumes made from poplin and sarcenet are popular, especially in shades of dark brown, purple, and bottle-green

• Black straw bonnets, or velvet ones to suit the color of the dress are more common in walking costumes than straw in natural shades

• In evening dresses, bodices match skirts, but the sleeves are more often white net, or clear white muslin let in with lace 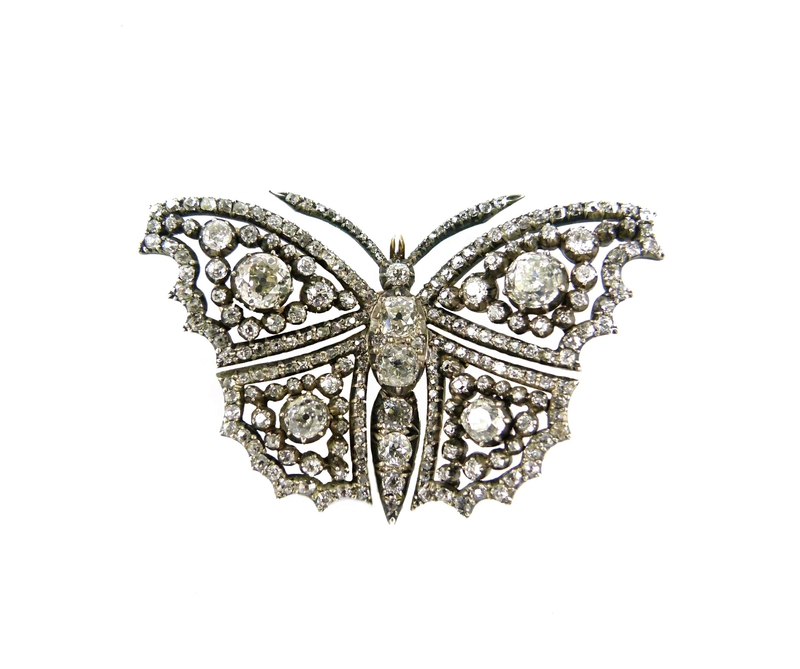 • A new trend in full dress ornaments: “a butterfly in diamonds” which is “placed in the middle of the forehead, and worn without any other ornament”

• Wreaths of winter flowers are also common in full dress, although they are brought round the front of the head rather than being placed at the back 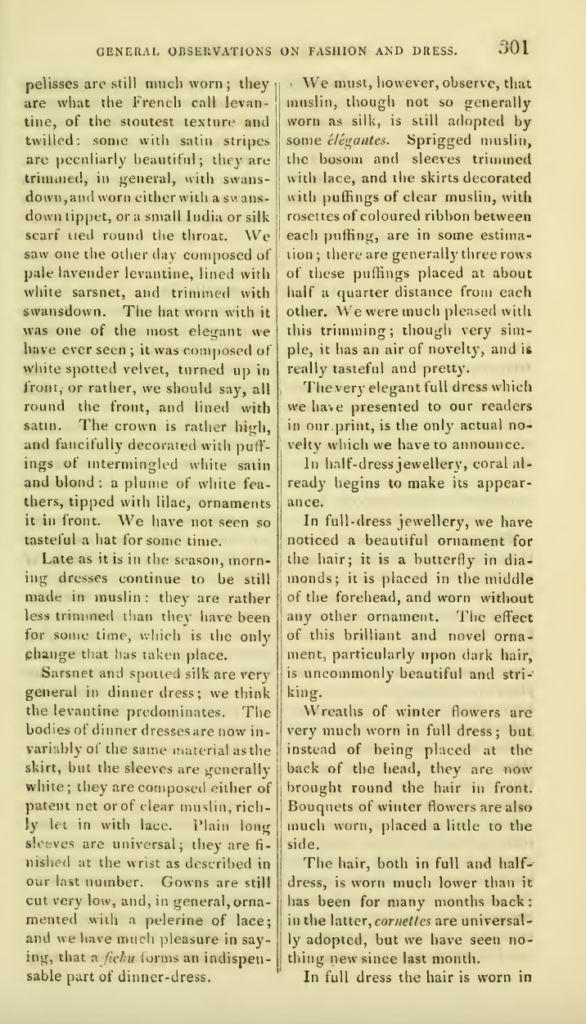 • Promenade costumes of white percale, topped with square shawls of bright colors: scarlet, royal purple, orange, lavender, and dark green  (made of cashmere for the most well-to-do, those of French manufacture for the rest)

• The bodies of dresses are never made separate from the skirts, which Ackermann’s correspondent asserts is a real advantage over English designs

• Muslin is the only think worn in dinner dress

• Blond lace is still common in full dress trimmings, especially when fastened up with sprigs of hearts-ease or orange blossom. But among the younger set, tulle over white satin is more popular.

• Gold ornaments are not currently in vogue; colored stones, or pearls with crosses or lockets are far more popular 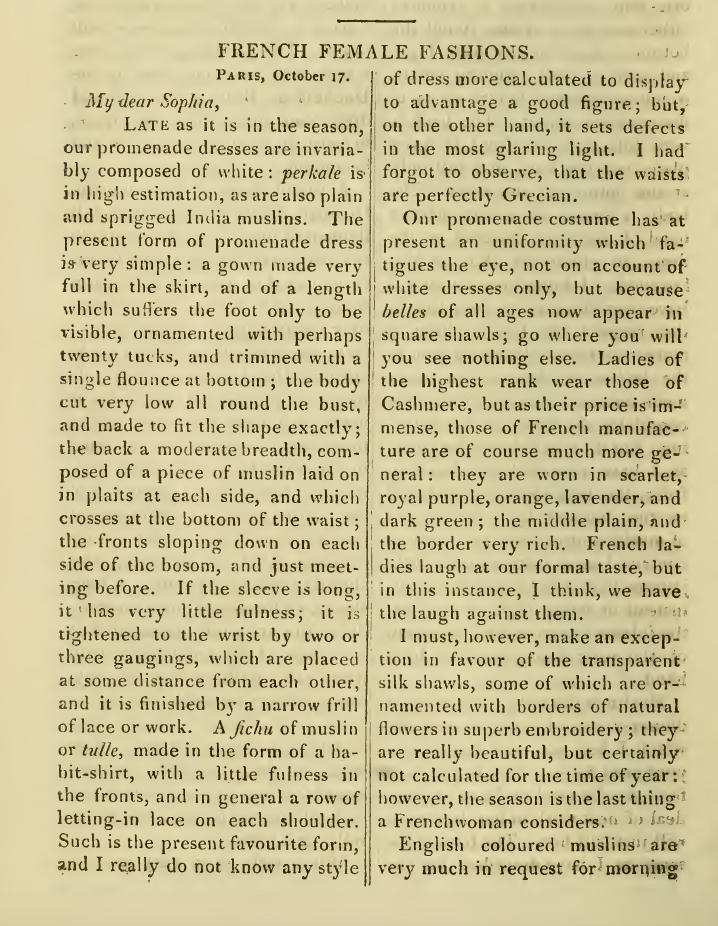 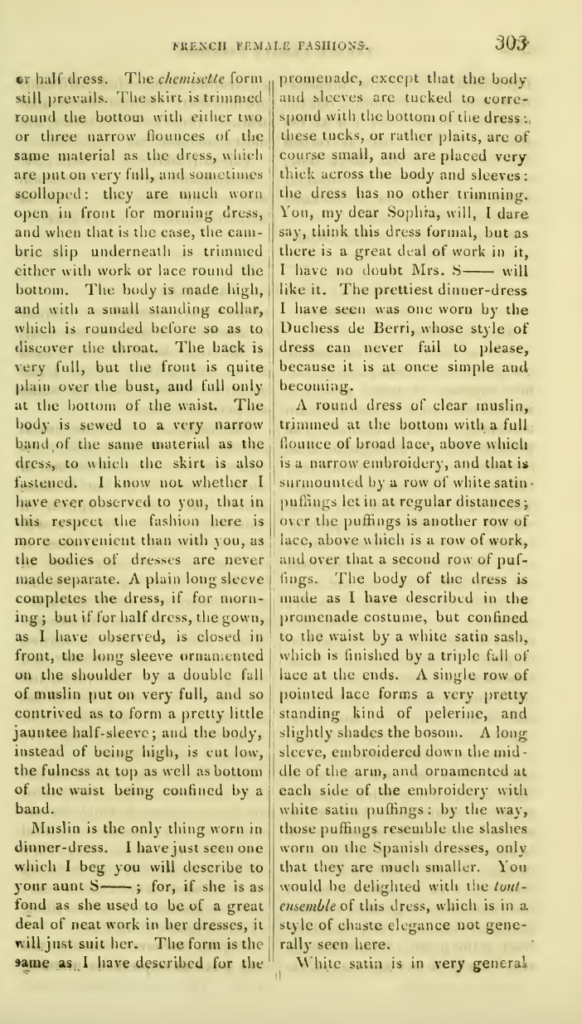 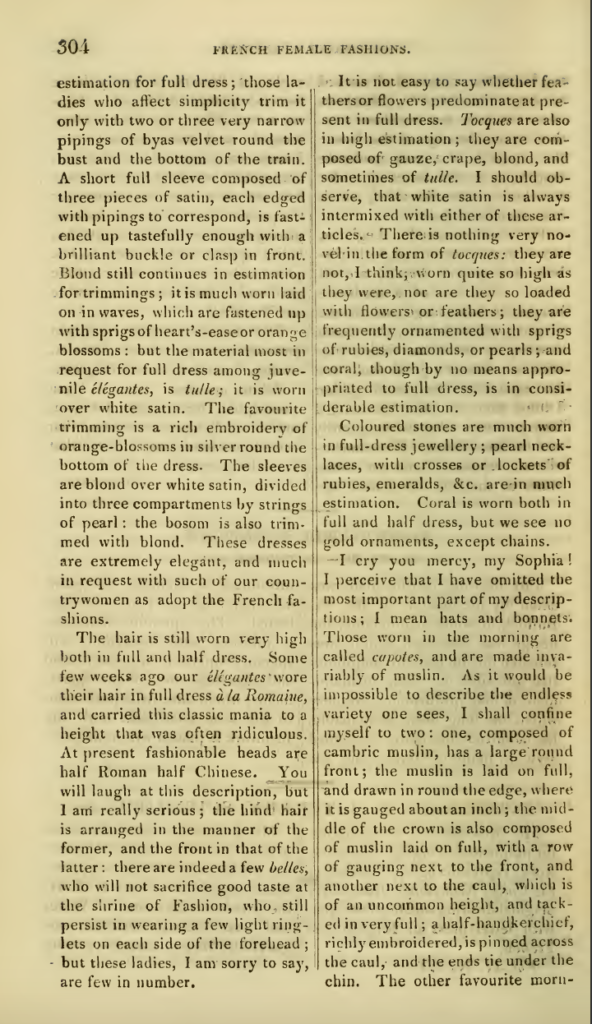 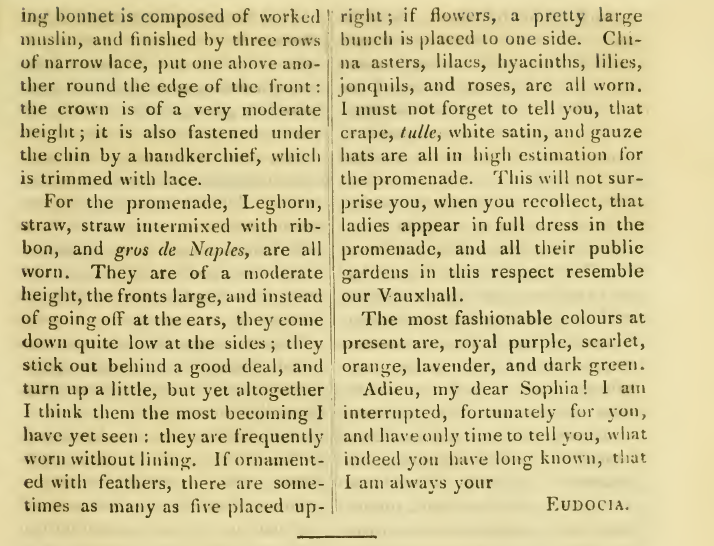 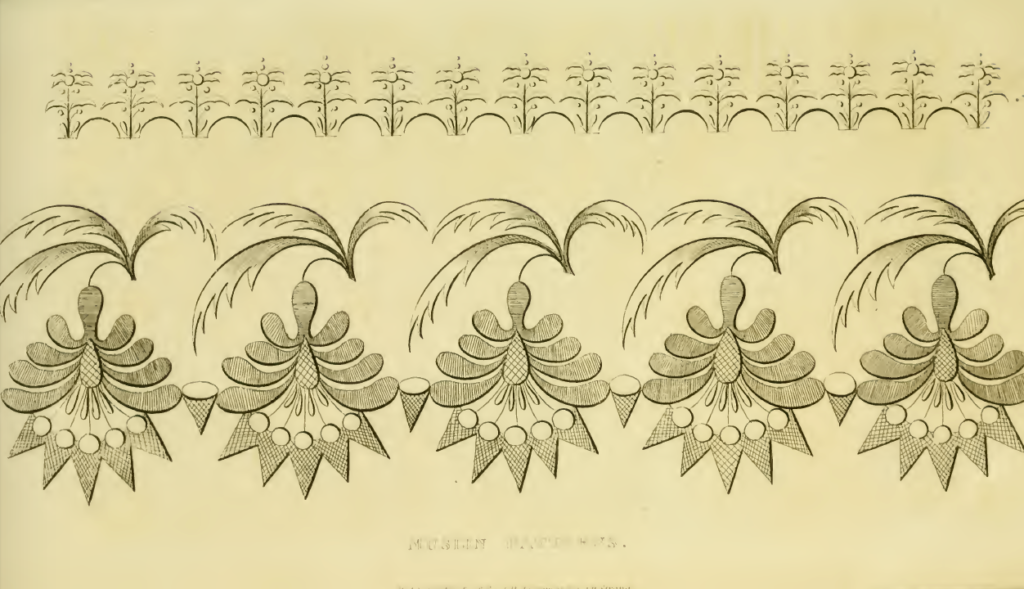 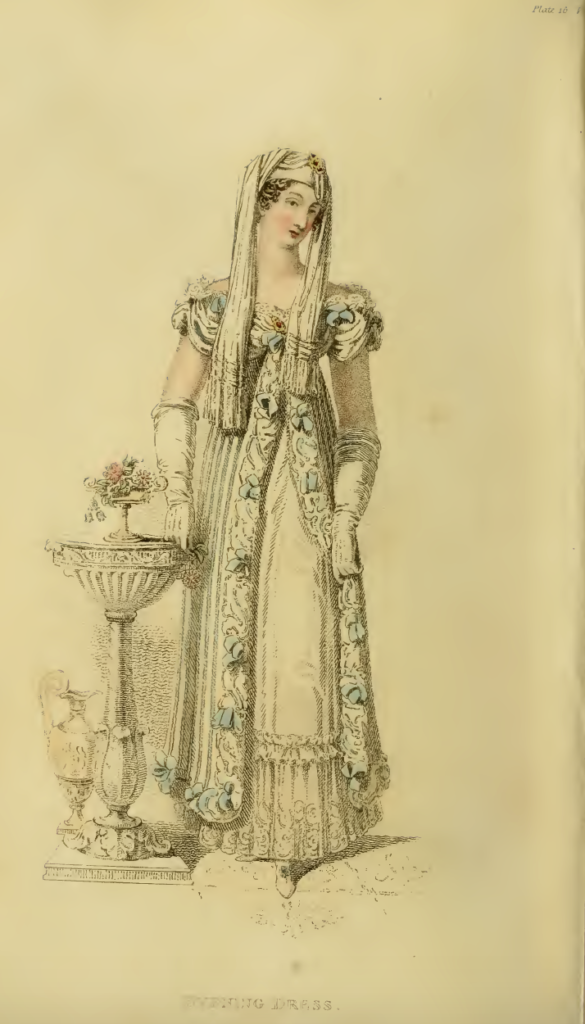 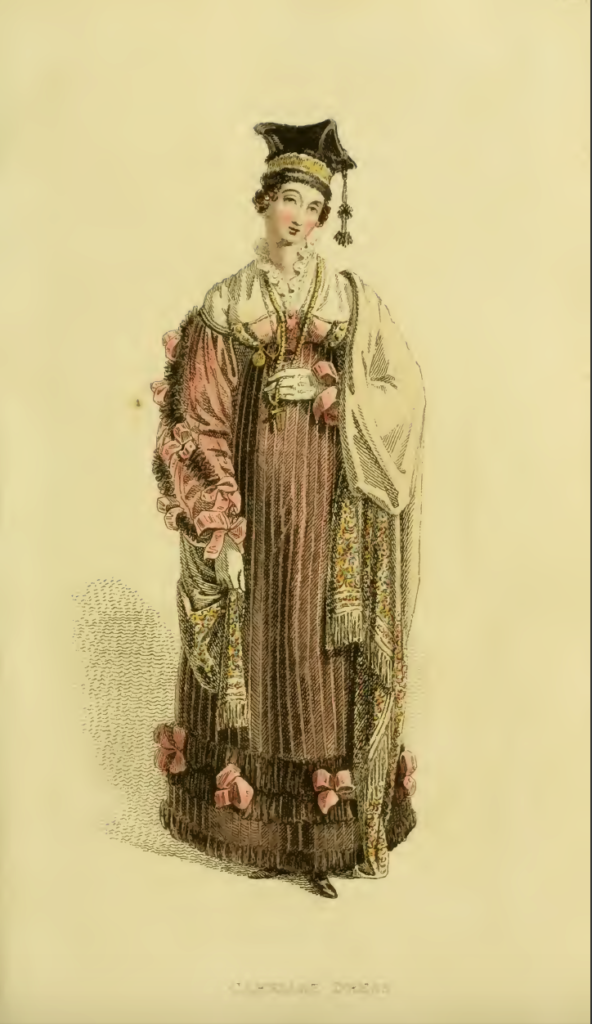 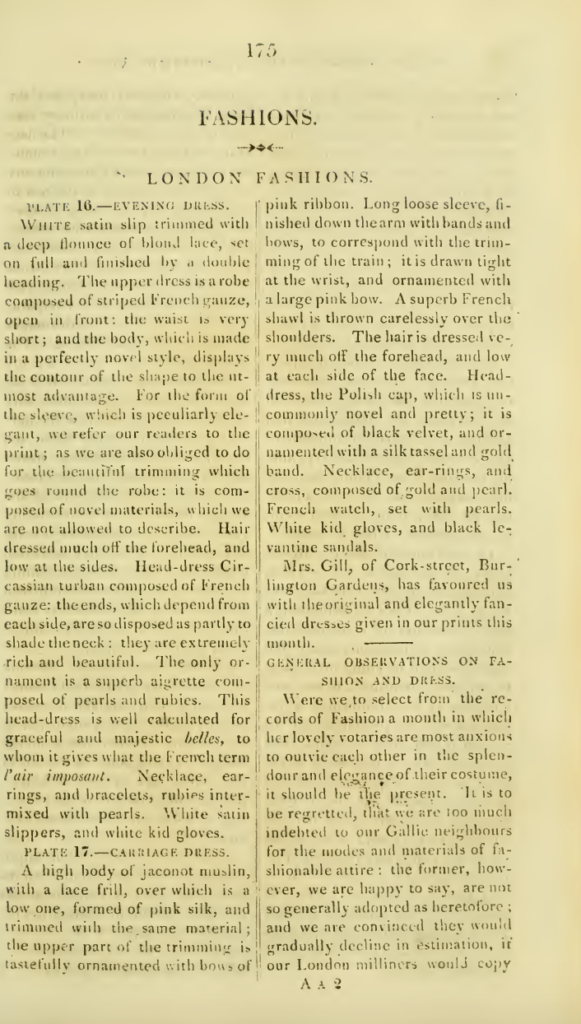 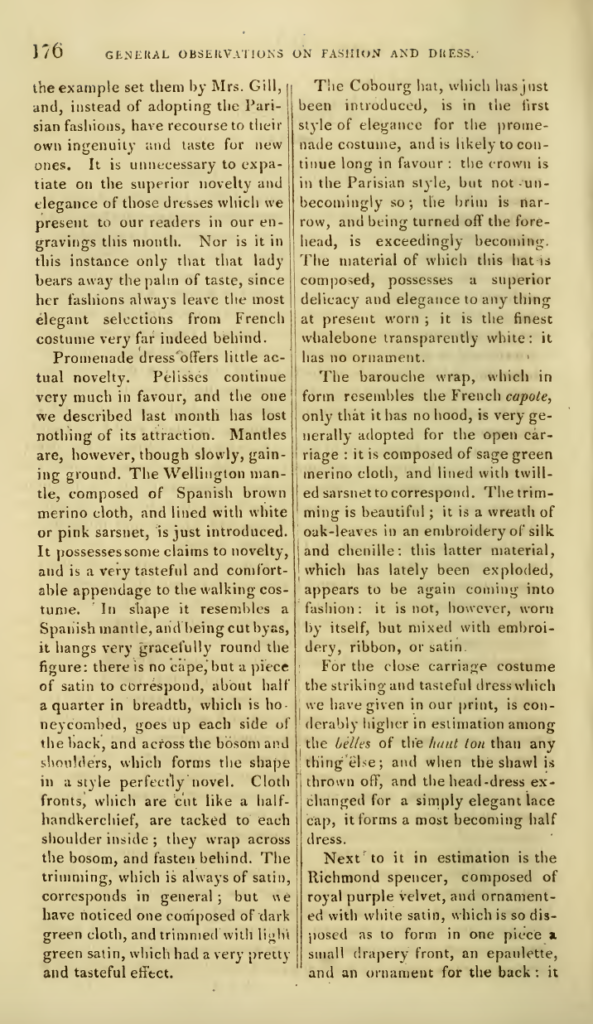 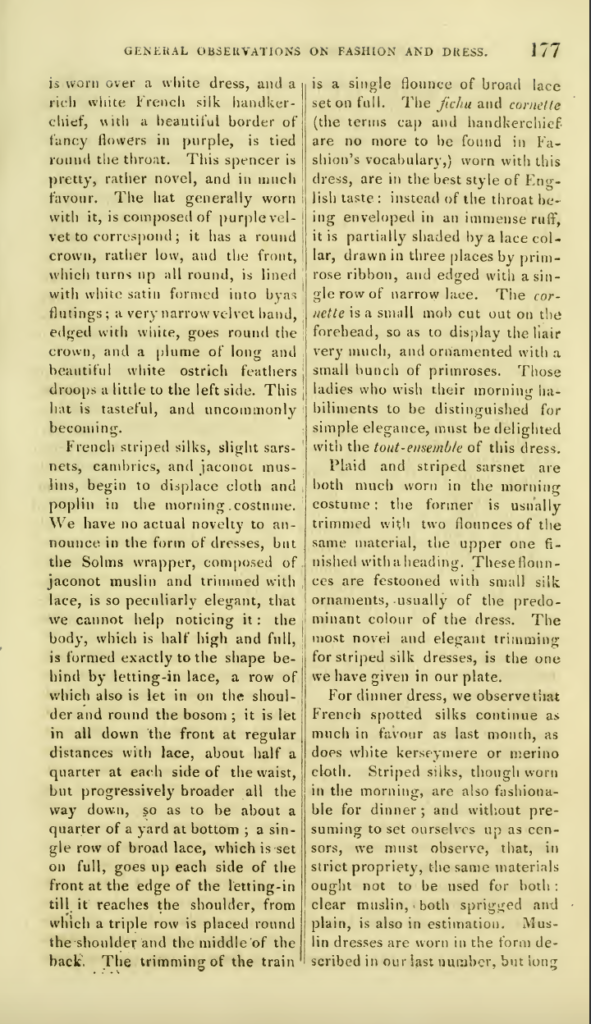 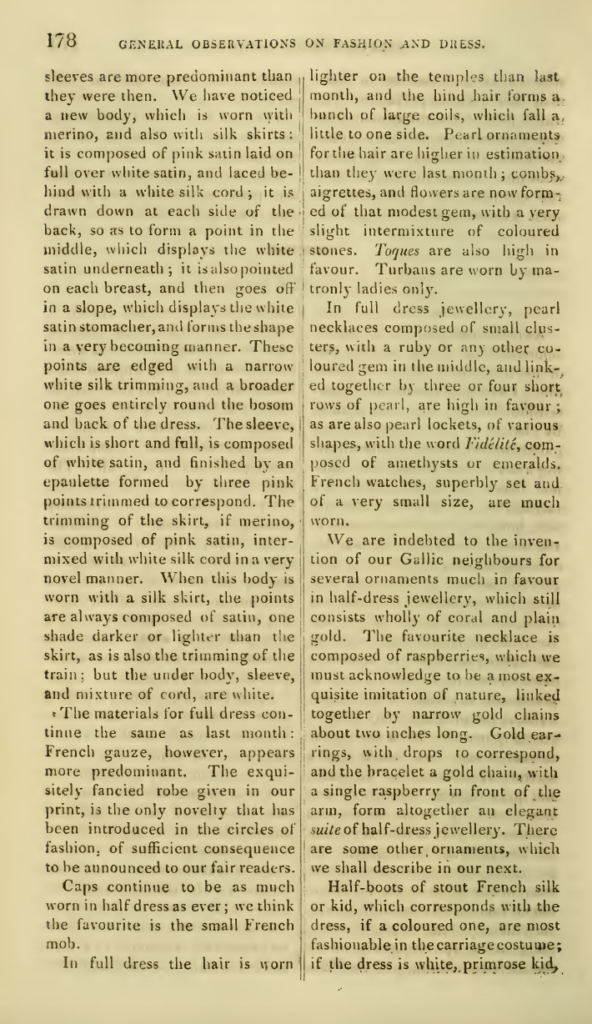 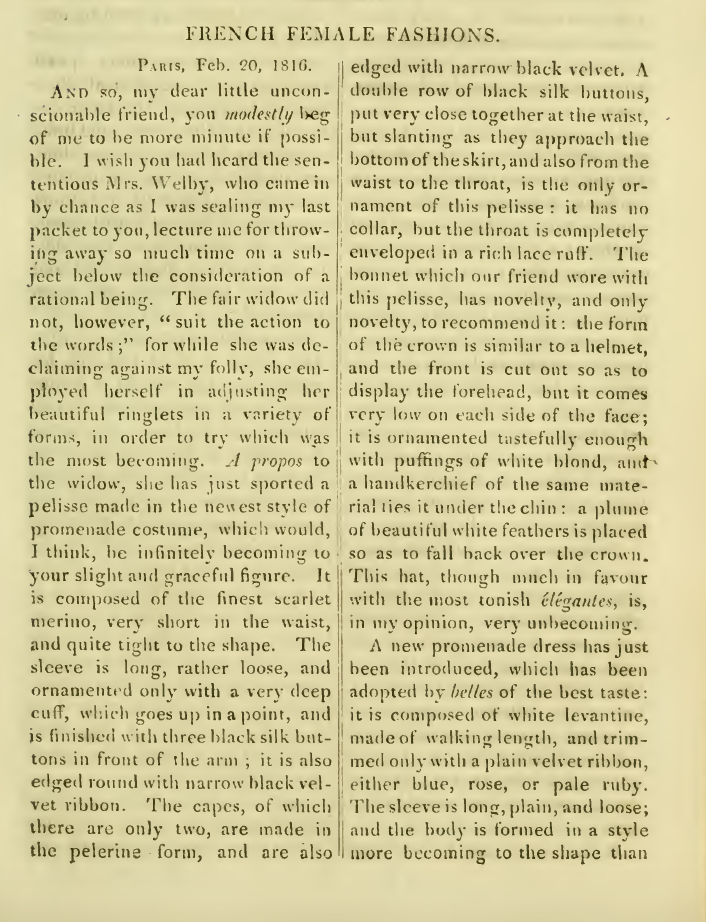 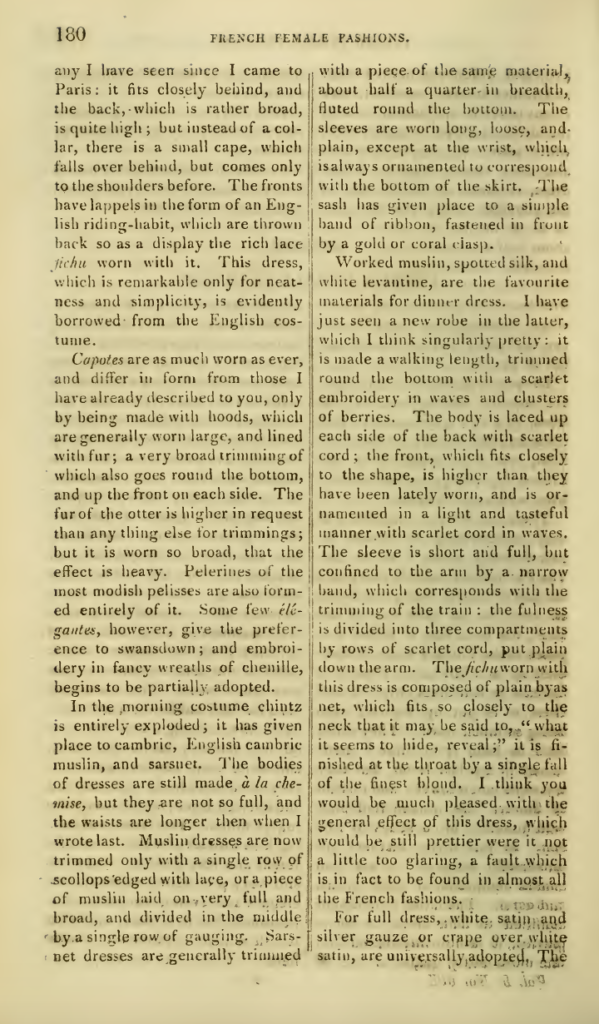 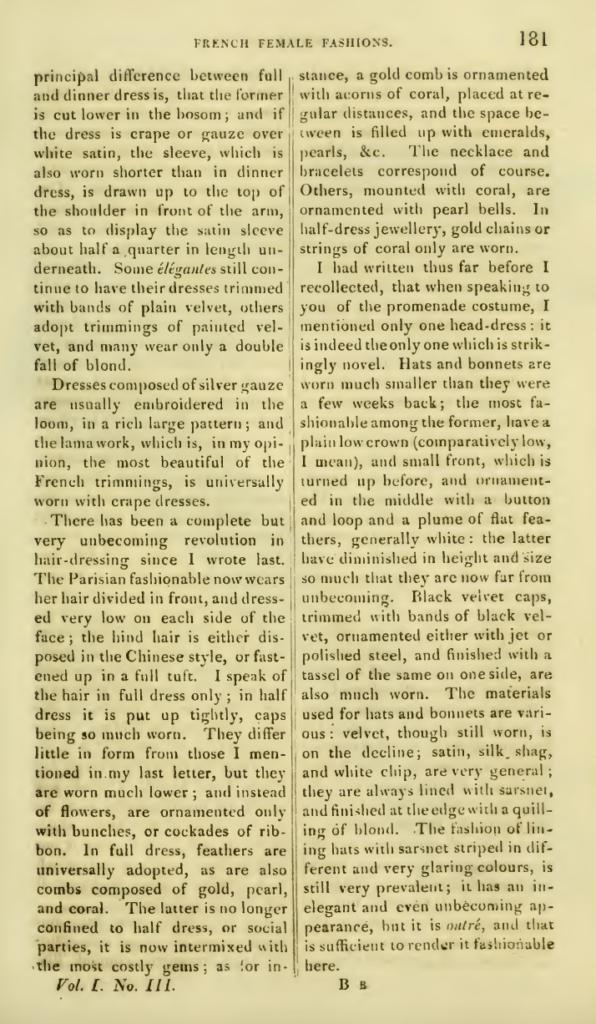 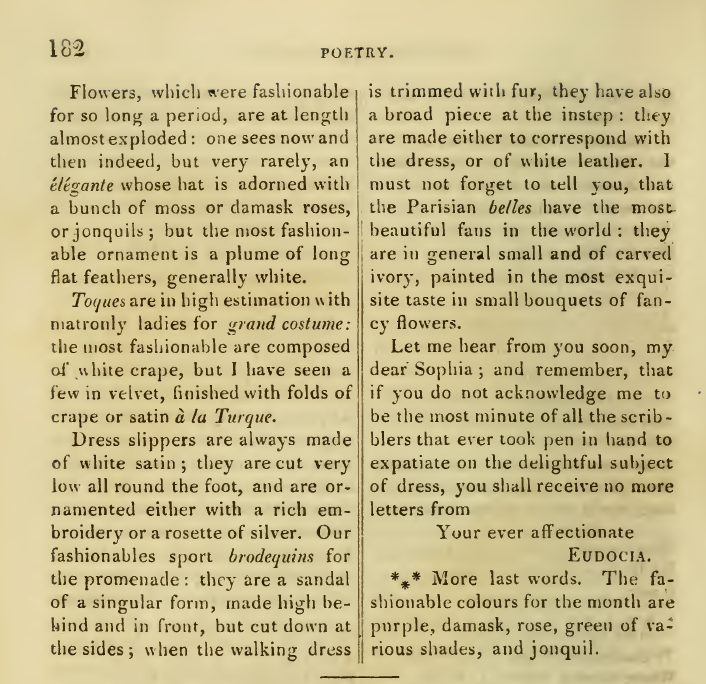 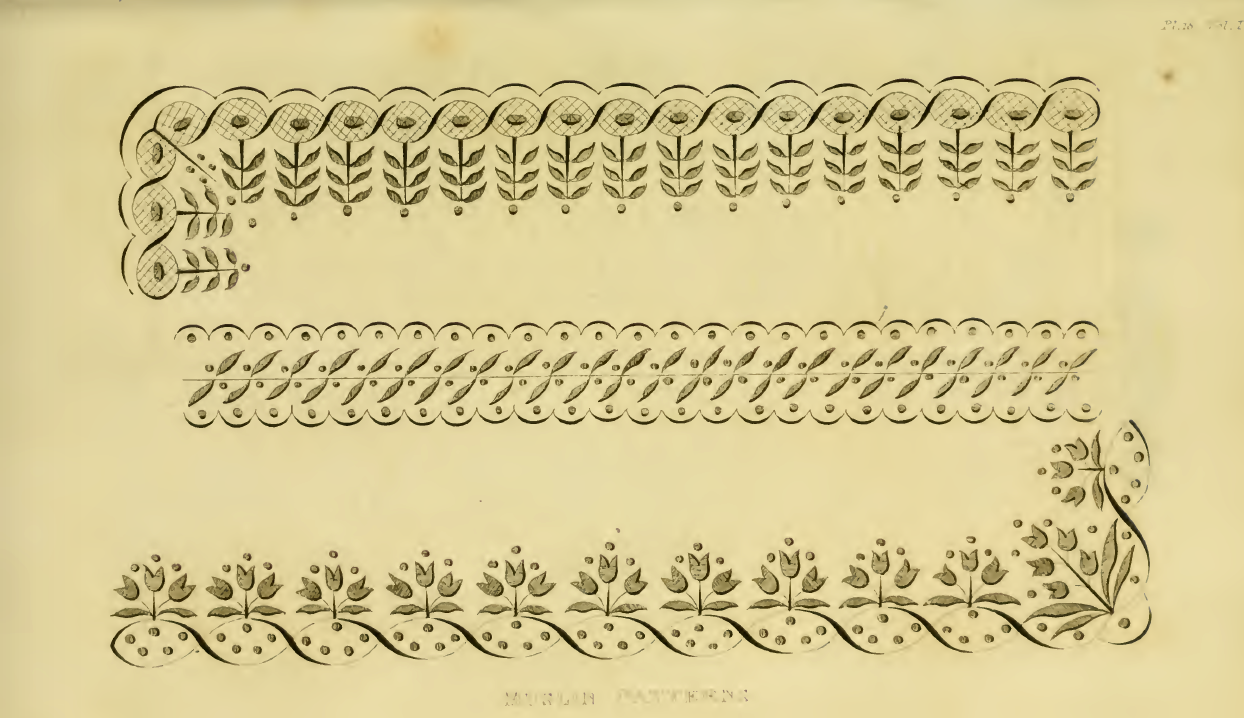 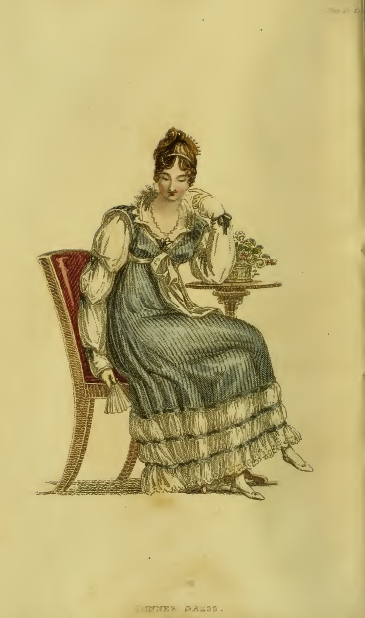 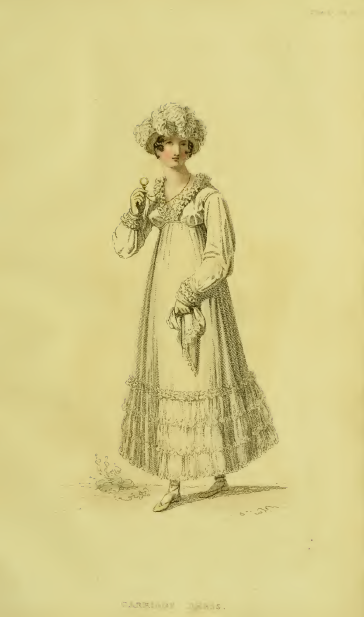 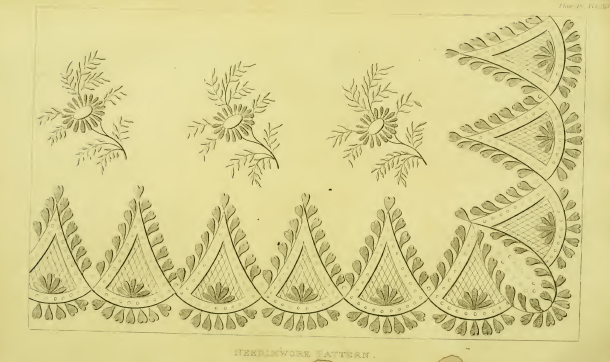 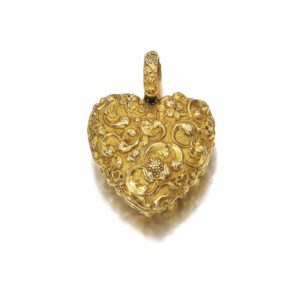 It’s been a hectic end of 2016, and a busy beginning of 2017 for me. I’m just starting a term as President of the New England Chapter of Romance Writers of America; I’m finishing the final edits on A Lady without a Lord, the much-delayed third book in The Penningtons series (yeah!); I’ve been working with my web designer to implement an updated look for my author web site; and I’m shivering in my socks because of ongoing intermittent problems with the heating system in our house (we’ve been told that the part arriving tomorrow will definitely fix the problem this time…). But I wanted to put up this quick blog post, just to let everyone know that I haven’t fallen off the earth, and will be continuing on with my Ackermann’s fashion plate project starting next week. END_OF_DOCUMENT_TOKEN_TO_BE_REPLACED