While putting together my Ackermann’s fashion plate posts last month, I came across several pages of drawings in the June 1810 edition of the journal. I thought they might be designs for period type ornaments, something that I’m always on the lookout for, so I screen-shot them and then set them aside for my files. 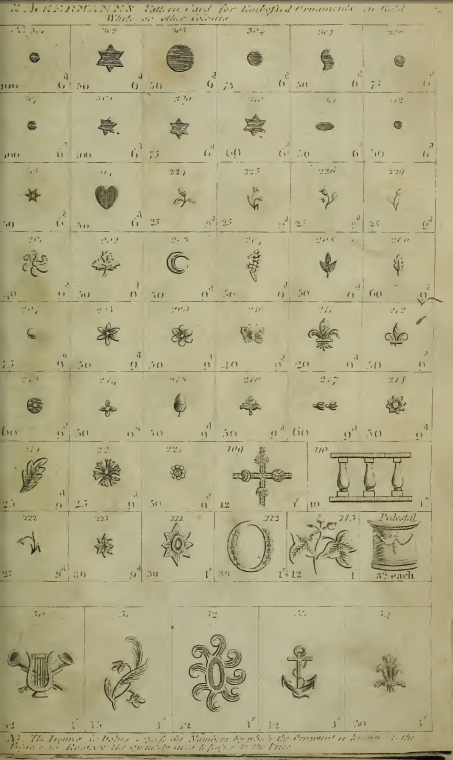 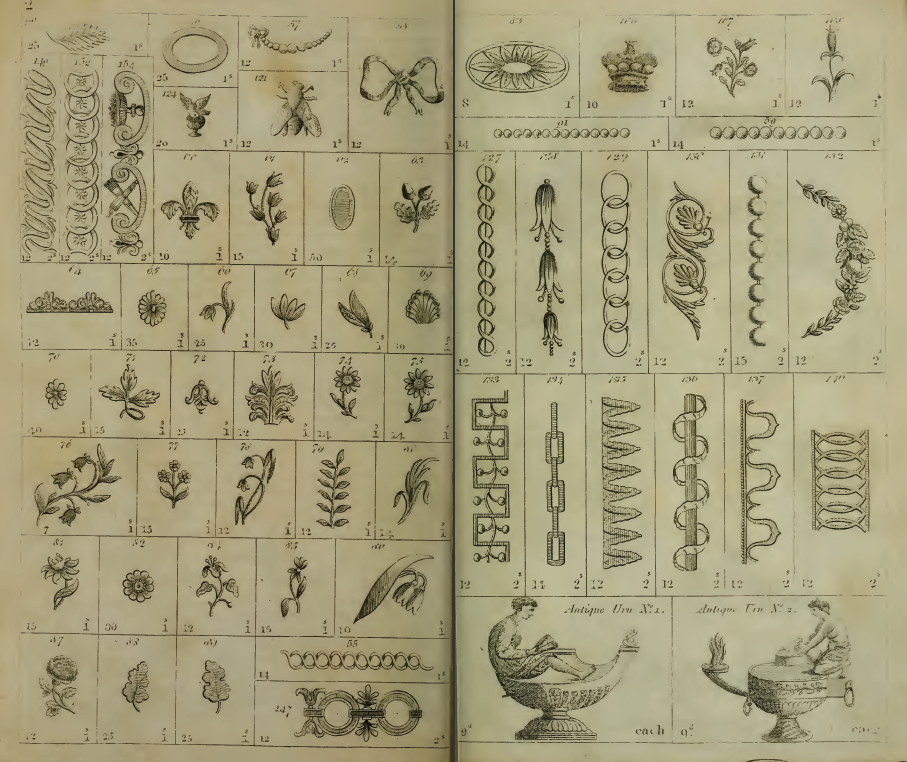 Today I had a chance to look at the images more closely, and discovered that my initial guess about the purpose of the drawings was wrong. The original scanning of the volume isn’t that great, so it was a bit difficult to make out the heading text, but with some careful squinting, I finally managed to suss out this description: “Pattern Cards for Embossed Ornaments in Gold, White or Other Colours.”

What the heck are “Embossed Ornaments,” I wondered, and what in the world did stylish Regency readers use them for? Jewelry? Trim for gowns or coats? A bit more research was clearly required.

Thank heavens for Google Books. A search using “Ackermann’s pattern card embossed ornaments” lead me to Maurice Rickards’s fascinating Encyclopedia of Ephemera: A Guide to the Fragmentary Documents of Everyday Life for the Collector, Curator and Historian (Routledge, 2000). This 550-entry alphabetically organized encyclopedia focuses on manuscript and printed ephemera in English dating from the 1500s to the present day. Information about “embossed ornaments” shows up in the Encyclopedia‘s entry for “Tinsel print” (see page 383), not a connection I would have made on my own.

A tinsel print, according to Rickards, is “a hand-coloured print embossed with metallic foil and other materials.” Taking up the idea from the 17th-century French vogue of decorating prints with additional material, early 19th century London toy theatre creators used tinsel to decorate their cut-out figures, “a deluxe version of their ‘tuppence coloured’ products.” Rickards reports that in addition to toy theatre makers, “many toy shops and stationers also sold ready-made addenda—breastplates, plumes, helmets, swords, jeweled necklets, etc., cut out and requiring only to be glued on to figures.”  He goes on to list Ackermann and H. J. Webb as purveyors of tinsel-print materials, specifically referencing the Ackermann’s pattern cards “for Embossed Ornaments in Gold, White or Other Colors” which I came across in the June 1810 issue. 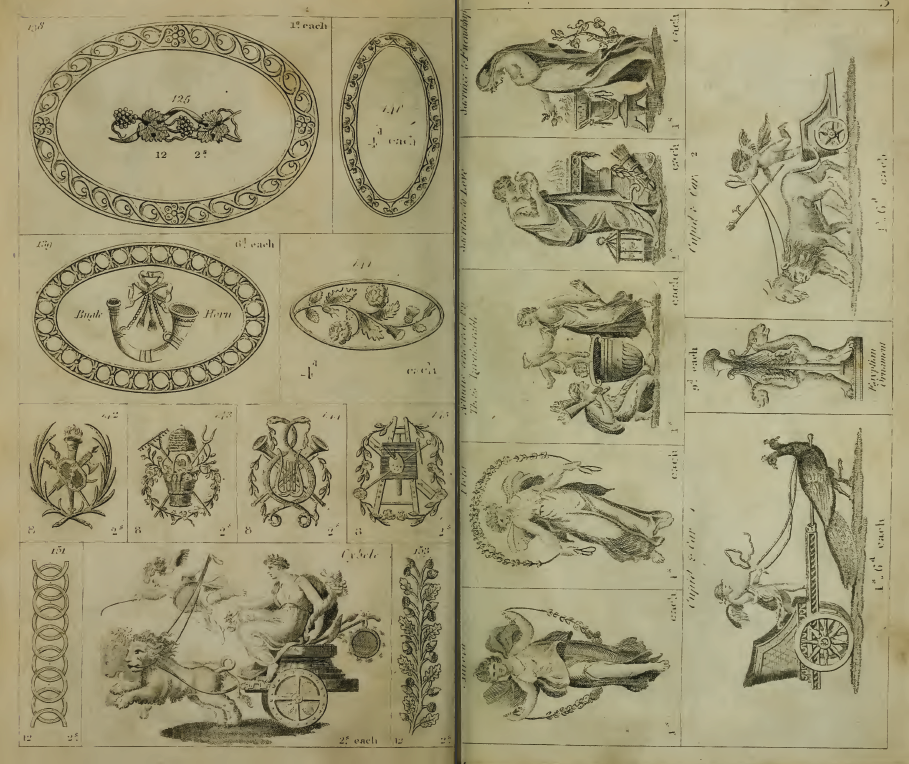 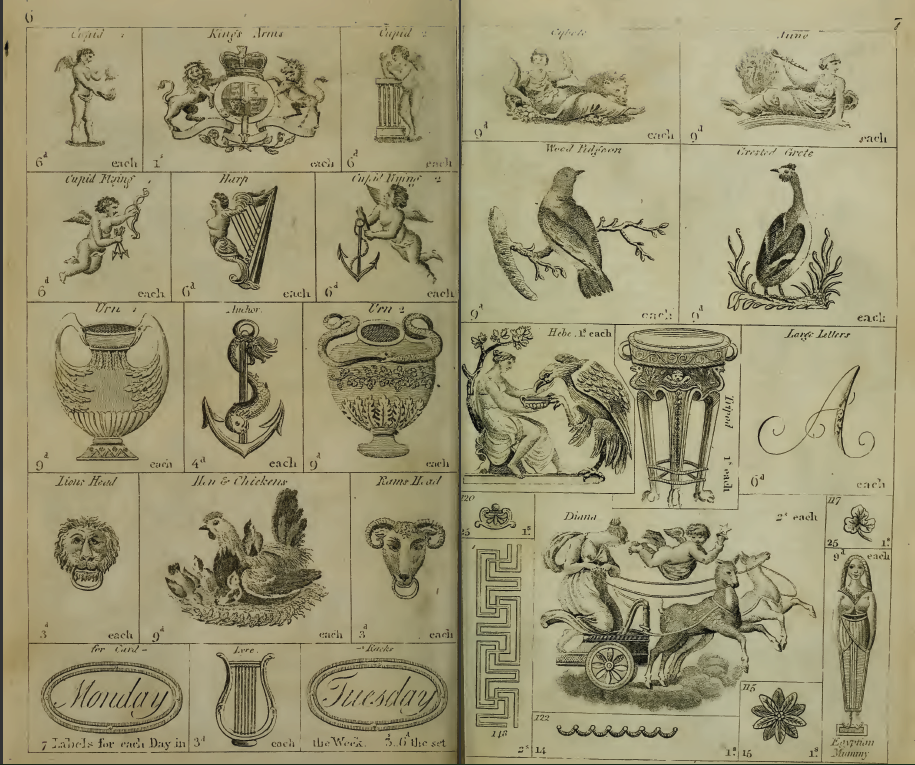 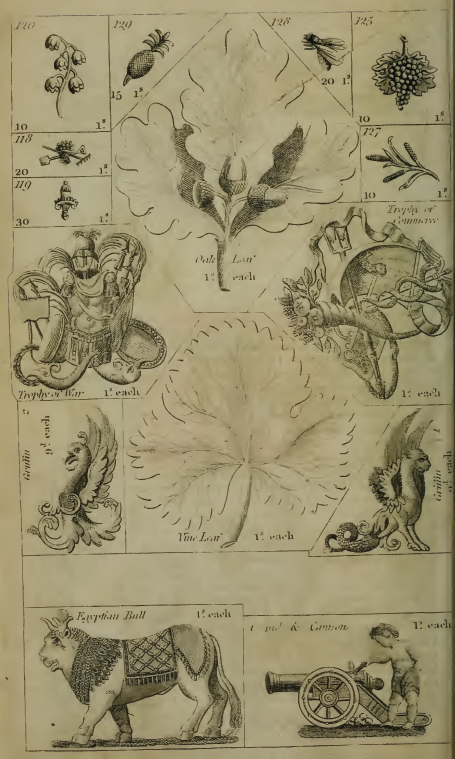 These illustrations, though, don’t seem intended for ornamenting toy theatre figures. Only after figuring this out did I realize that the article that followed the Pattern Card illustrations, “Observations on Fancy-Work, As Affording An Agreeable Occupation for Ladies,” was connected to them. The article mentions ladies who “have been led by genius or example to acquire the art of painting,” and who use said art to decorate “vases, fire-screens, hand-screens, flower stands, boxes, and other articles (XVIII.iii, page 397). But even “those females who have not made themselves mistresses of the art of managing the pencil” can still participate in such decorative embellishment: by using embossed ornaments, conveniently available at Ackermann’s!

I wonder: would Mr. Darcy lump embossing in with the other “common extent of accomplishments” such as painting tables, and covering screens, and netting purses? Or would it not even rate that high? 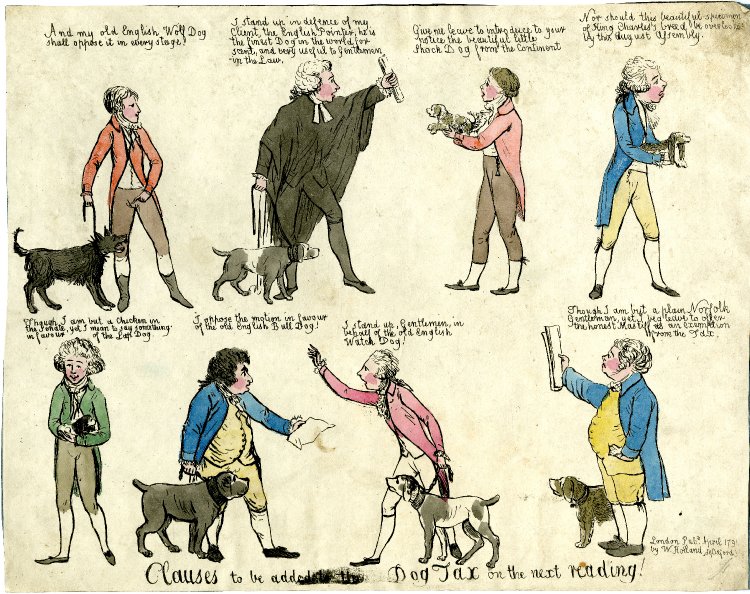