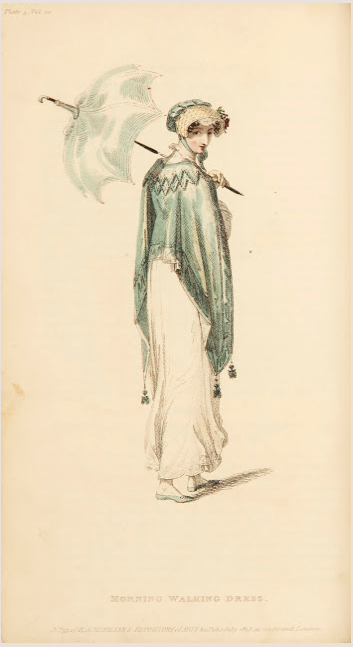 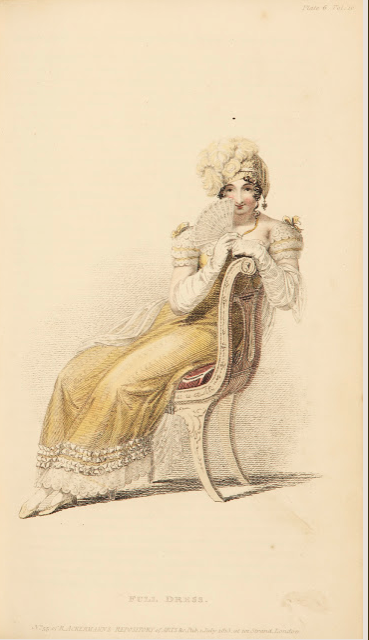 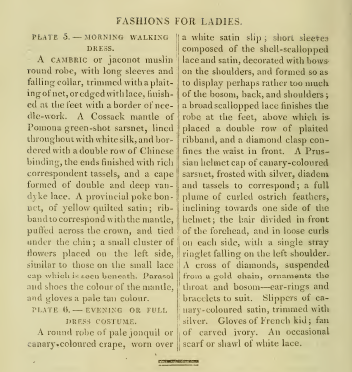 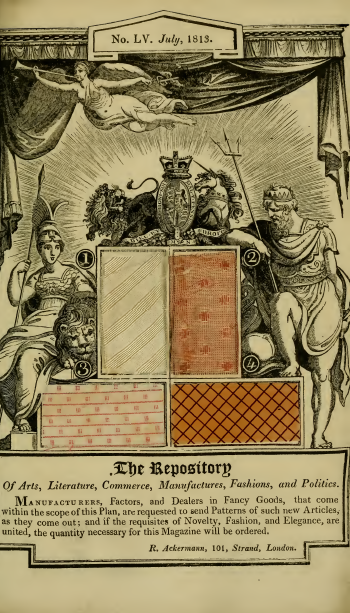 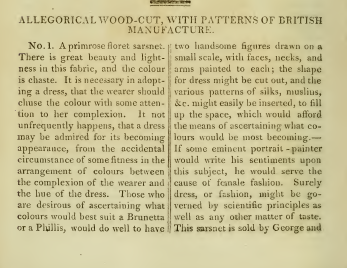 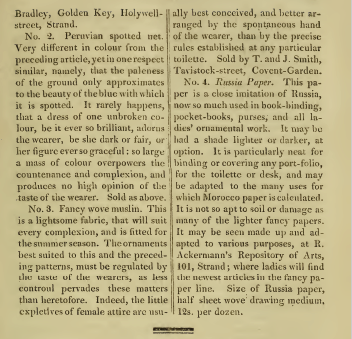 The writer of the descriptions and the worker who colored the plates for June 1813’s issue seem not to have been on the same page. The satin “Pomeranian mantle” of plate 45 is described as “jonquille,” a color Regency researchers say is a yellow, similar to that of a spring Narcissus (or jonquil). But the mantle in the plate appears to be light blue. Plate 46’s “Ball Dress” appears white in the plate, but is reported to be “lilac or apple-blossom” in the description. And the scarf worn over it appears to be a blueish-green, while the copy describes it as “Lemon-coloured or white… with rich embroidered ends of gold and coloured silks.” I wonder how often the writer and the person hired to hand-color a fashion plate got their wires crossed? 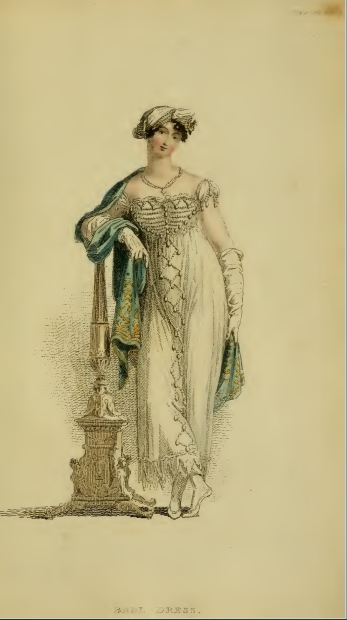 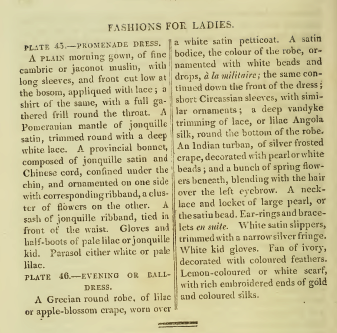 Whether the underlying dress is white, lilac,or apple-blossom, the beadwork and hem trimming on this ball gown is making me drool: “white beads and drops, à la militaire” and “a deep vandyke trimming of lace, or lilac Angola silk, round the bottom of the robe.” I don’t know if my needlework and beading skills would be up to the task, but I find myself itching to attempt to reproduce these fantastic adornments. This may be one of my favorite plates in all of Ackermann’s to date. 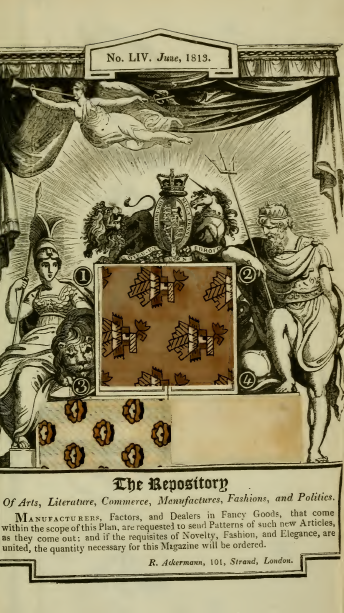 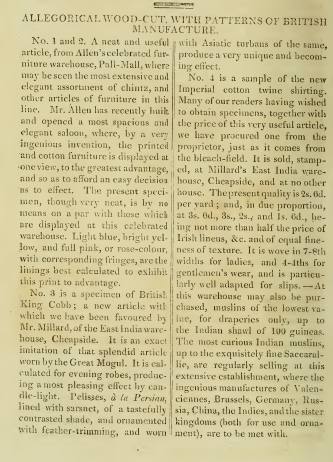 June’s fabric samples seem to designed to puff two particular warehouses. First, “Allen’s celebrated furniture warehouse” in Pall Mall, which has “recently built and spend a most spacious and elegant saloon, where, by a very ingenious invention, the printed and cotton furniture is displayed at one view, to the greatest advantage, and so as to afford an easy decision as to effect.” I wonder what that “ingenious invention” might have been?

Second is Mr. Millard’s East India warehouse in Cheapside, which is advertised as having “Imperial cotton twine shirting” that can be found at no other house, as well as a wide variety of muslins, from “the lowest value, for draperies only, up to the Indian shawl of 100 guineas.” Did Mr. Ackermann get a cut of Mr. Millard or Mr. Allen’s profits, if their customers mentioned where they had heard of them, I wonder?

Anyone have any idea of what “British King Cobb” might be? Such a name is given to sample #3, the pattern on which is described as “an imitation of that splendid article worn by the Great Mogul.” I find it rather ugly, myself, but perhaps the fashion for Oriental garb made it acceptable to 1813’s fashionables?

Tulips and other small flowers adorn this month’s needlework pattern: 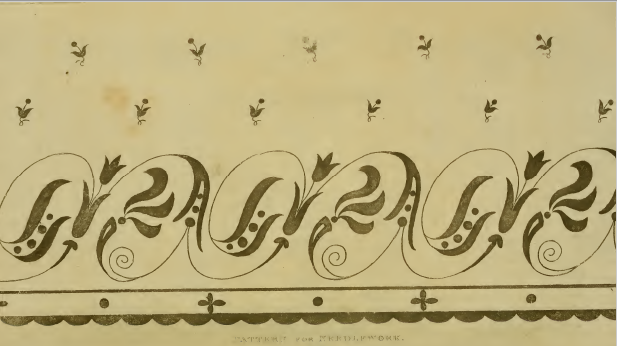 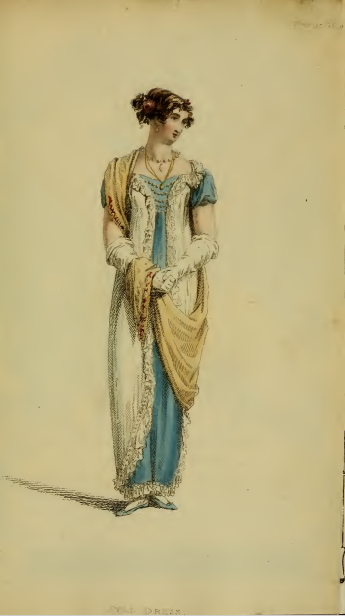 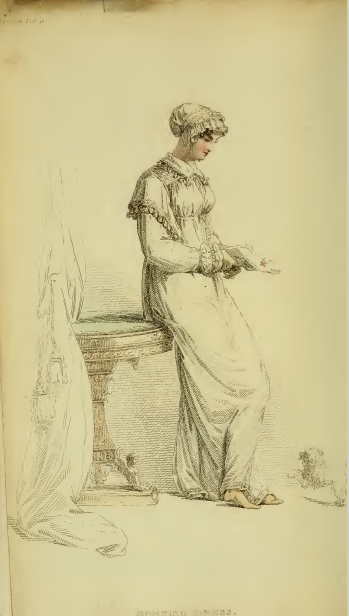 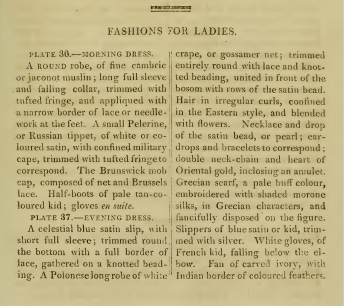 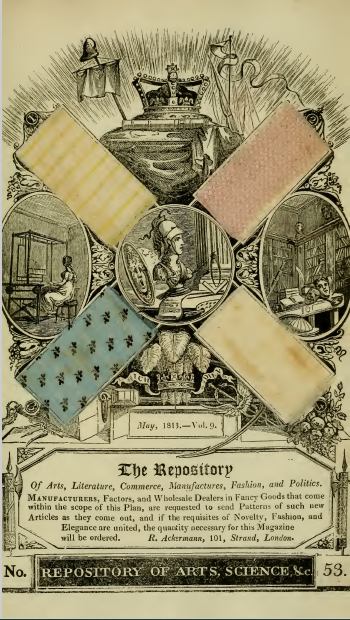 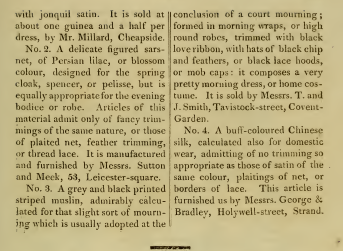 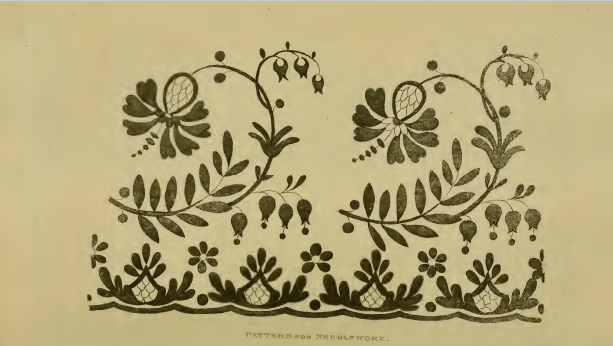 In Regency romances, we often read of characters perusing fashion plates to choose patterns for their own dresses. But in looking at Ackermann’s April 1813 plates, I’m struck by the fact that such plates are often drawn in a way that would make it difficult, if not impossible, for it to be used as a precise model for an actual dress pattern. Plate 29, of a “Morning Costume,” is shown full on front, but Plate 30, for a “Carriage Costume,” is a side view, and with its lady seated. The long Russian mantle worn over the “high round robe of jaconet or cambric muslin” covers all of the details of the dress’s bodice and sleeves. Would a viewer know enough from the description—”with plaited bodice, long sleeve, and deep falling frill, terminated with a vandyke of needlework”—to be able to faithfully reproduce this dress? Or was the idea less about providing instructions for making a perfect copy, and more about giving readers (and dressmakers?) a more general sense of what was currently deemed fashionable?

Plate 30 does provide a luscious example of a distinctly Regency color: “pomona or spring green.” Doesn’t it make you eager to throw off the chills of winter and hunt for the green points of spring bulbs poking through last fall’s leaves? 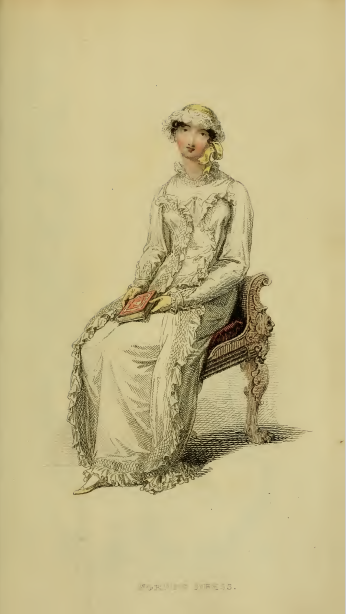 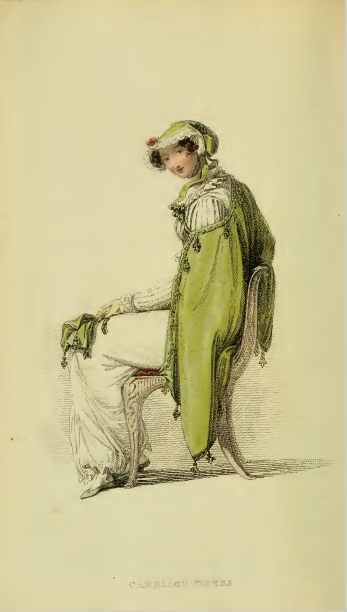 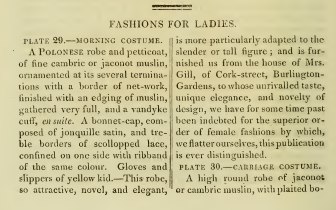 This month’s issue includes no fabric samples, but instead this lovely pattern for needlework. Can you imagine spending a rainy spring afternoon adding this pattern to the hem of a gown? 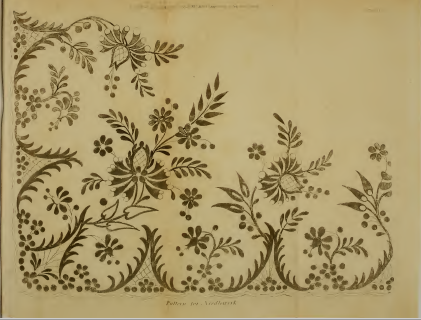