The description of the first of February 1816’s fashion plates, Plate 10, an “Evening Dress,” is rather frustrating. The writer reports that “the slight view which we had of the dress will not permit us to describe” its trimming; it advises readers to refer to the plate to “form a very correct idea of it.” Readers are also advised to refer to the plate for a clearer depiction of the body of the dress, which is reported to be “extremely novel and elegant,” but which is not described in any detail. Was there some scheduling mix-up between dressmaker, copy writer, and artist?

This made me wonder how the writer, dress designer, and artist who created the fashion plate interacted. I had once assumed that the dress designer also supplied the descriptive copy, but here, Mrs. Griffith, of Riderstreet, St. James’s, the “inventor” of the dress designs, is obviously a different person than the one who wrote the column. It sounds as if the writer of the copy viewed actual dresses (if only for a short time!), rather than the plates, to write the copy, and that the writer wrote the copy before having the chance to view the finished plates.  Does anyone know of any sources that talk about how such plates were created? 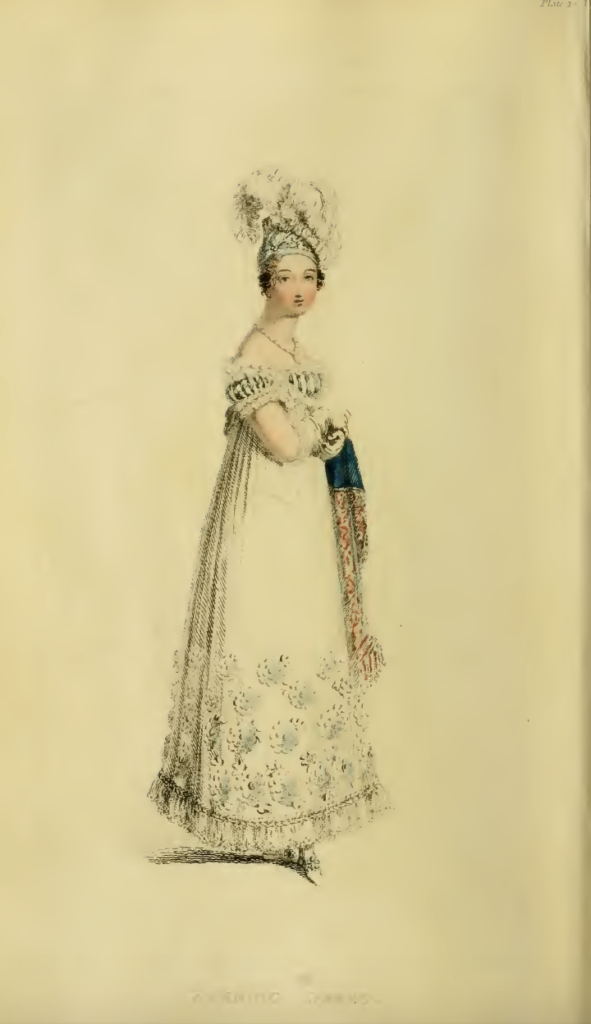 The Evening Dress seems to be adorned with puffs of silver or light blue, with a pleated bodice that barely rises over the top of the shoulders. Not a dress that one could wear a corset under, I’d wager. The slippers are of “white satin,” “trimmed en suite, and made, as all dress shoes are now, to come very high over the foot.” The headdress, with its small cylinder sticking up from the top almost like a chimney  is styled “toque á la Rubens.” 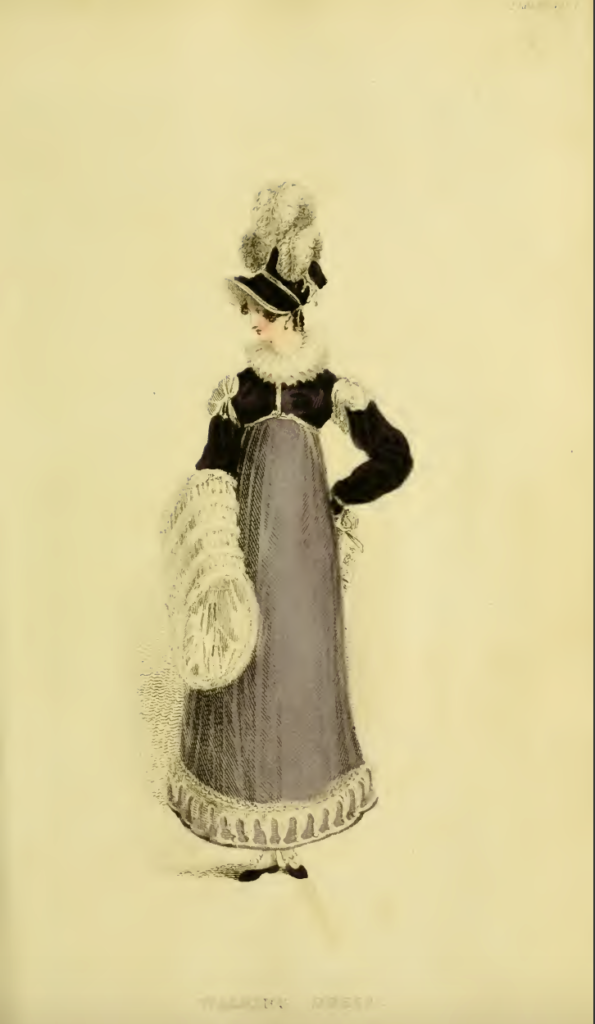 The copy writer must have been allowed more time with Mrs. Griffiths’ Promenade Dress, for the description here is far more detailed. Although we aren’t told what, precisely, the “new-invented trimming” that adorns the hem of the dress is made from, readers are assured that it has “an uncommonly light and pretty effect.” The dark mulberry of the dress, with a velvet spencer one shade darker, makes for a dramatic contrast with the oversized “Roxburgh muff,” made of white satin and swansdown. The muff is so large, you might well keep a small pet inside! Although readers are cautioned (enticed?) by the note that said muff is “from the beauty and delicacy of its materials, calculated only for the first style of promenade or carriage dress.” Would Mrs. Griffiths allow one to purchase her muff alone, without knowing with what dress it might be paired? 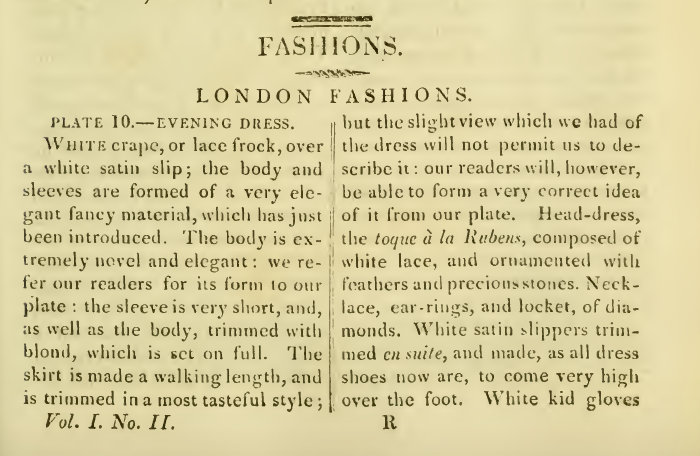 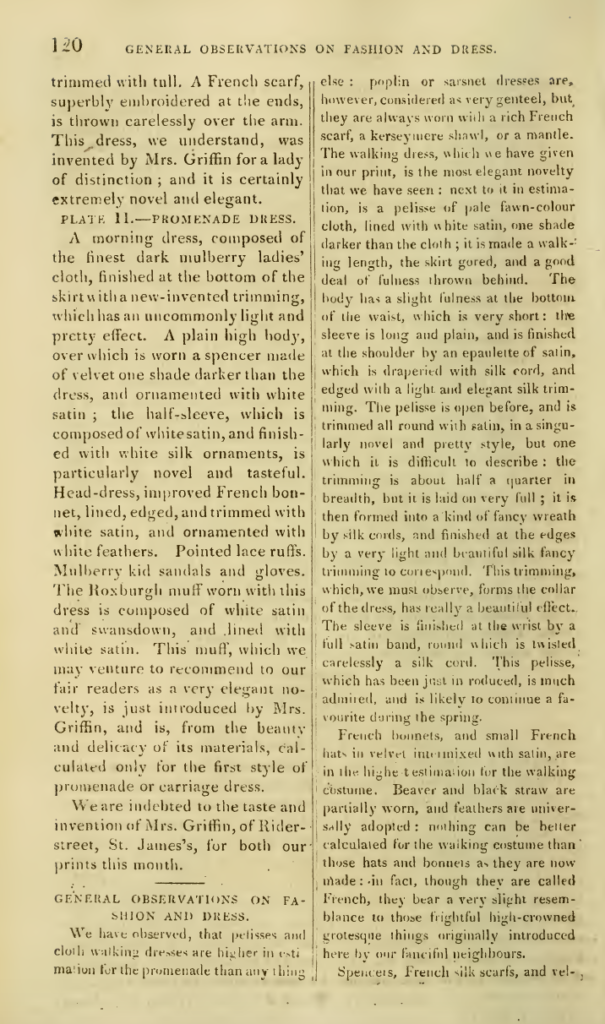 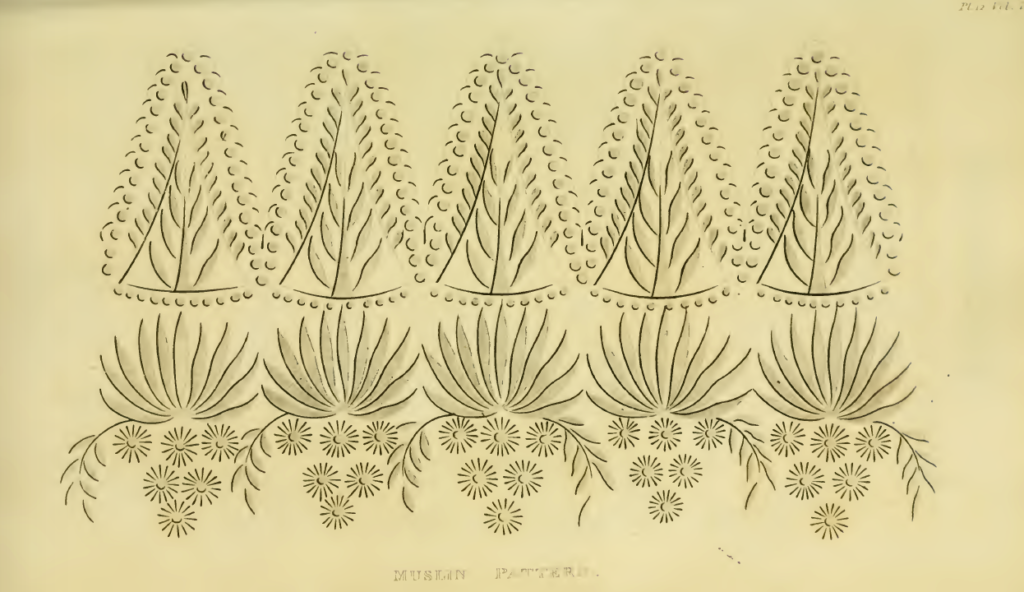 The start of 1816 also signaled the start of the second series of Ackermann’s Repository of Arts, Literature, Fashions, Manufactures, &c. In the note “To Our Readers and Correspondents” in Vol. I, no. 1 of this second series, the editors note “though some few individuals may perhaps experience disappointment at the omission of certain articles which they have been accustomed to find in our pages, we are confident, that the general voice will pronounce in favour of our endeavours to heighten their interest and to enlarge the sphere of their utility.” One thing that has been cut is the “Allegorical Wood-Cut, with Patterns of British Manufactures,” i.e., the fabric samples that had once appeared at the back of every edition of the Repository. They had been becoming more and more rare over the years, replaced by the less expensive black and white needlework patterns; 1815’s volume included only two fabric sample pages, one in January and one in May. Had the practice become too expensive? Or were drapers and dressmakers coming out with their own catalogues, and no longer needed to puff their wares in the Repository? 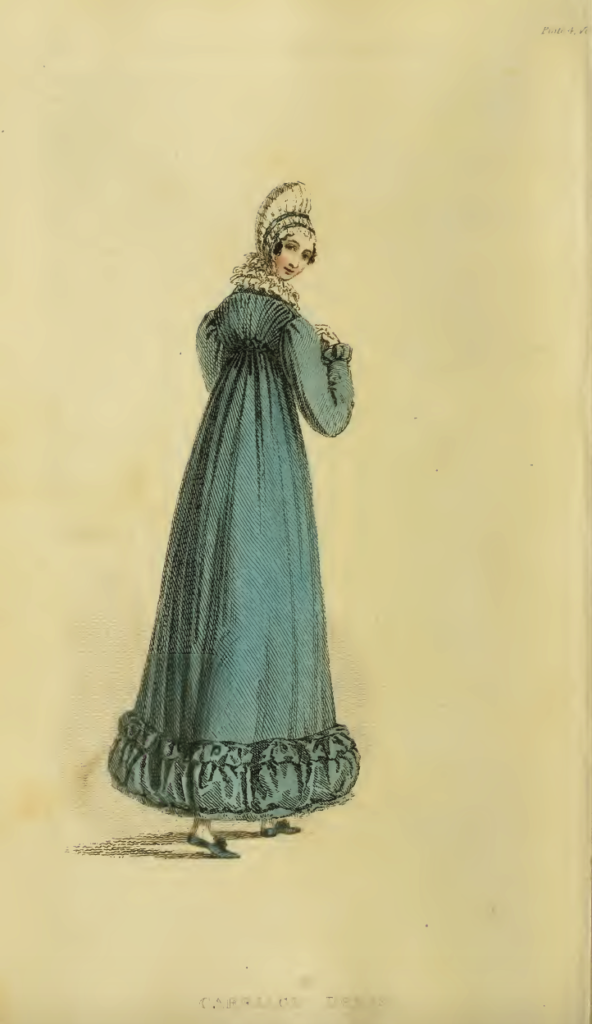 January’s first fashion plate, a “Morning or Carriage Dress” (plate 4) of an unspecified “dark blue ladies’ cloth.” The back of the bodice is gathered tight at the waist, and spreads out across and off the shoulders, almost like a fan. Dark blue satin, cut on the “byas,” trims the hem of the dress. Most striking is the “headdress al la mode de Paris” made from white lace ornamented with two rolls of ribbon. It almost looks like the coxcomb of a rooster, doesn’t it? The description terms it “in the highest degree original”; I wonder if any of Ackermann’s readers thought “original” might just be shading over into “silly” here? 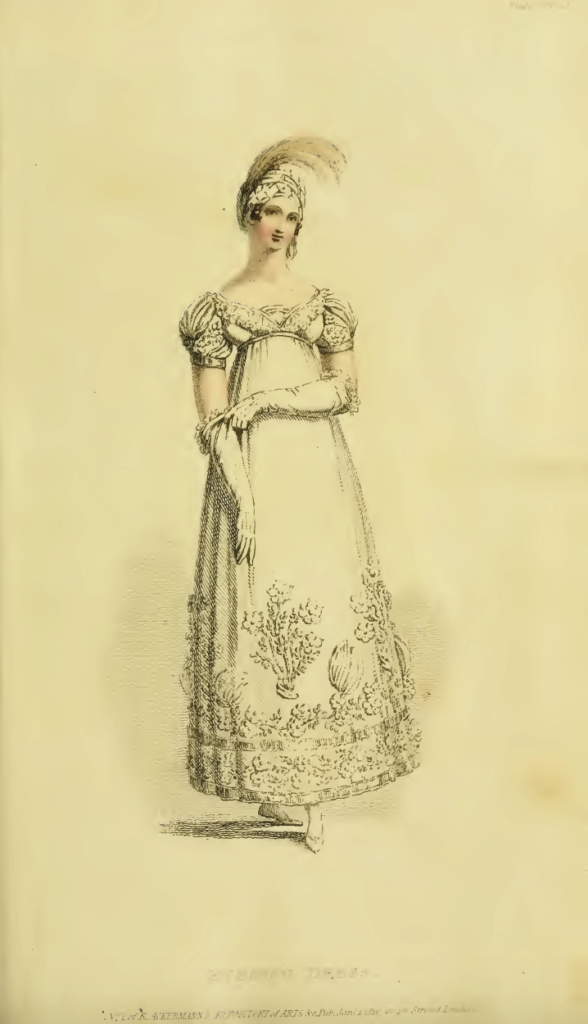 Plate 5, an “Evening Dress,” is plain in its underlying lines, but “superbly ornamented with French Lama work in silver.” I couldn’t find any information on “French Lama work”; is it a kind of embroidery or crewel work, perhaps? The ornamentation on the skirt, which is not confined just to the hem but rises almost past the lady’s knees, looks almost three-dimensional, doesn’t it? The bodice is also quite intricate, with the “crape fronts of the bosom open at each side, so as to display the white satin one underneath.” The sleeves echo this intermingling of satin and crape, with the satin this time the recipient of silver ornamentation. Mrs. Bean, of Albermarle Street, is the designer of both of this month’s dresses. 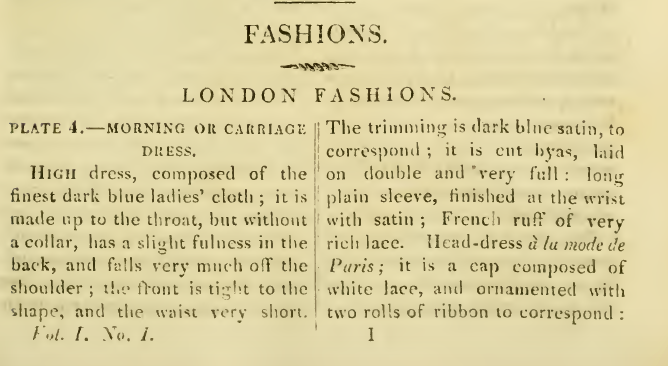 Though readers interested in fashion might have mourn the lack of fabric samples, the editors invite them to rejoice at an addition in the updated Repository: “The attention of our fair readers, especially those resident in the country, is requested to our notice respecting an extension of our observations on Female Fashions, which we trust will give them general satisfaction.” These extensions take the form of longer columns, rather than additional fashion plates, alas. But with the war with France finally over, English readers must have been eager for news from the heart of fashionable taste: Paris. As the commentary accompanying January’s fashion plates notes “Although the French fashions, in their present fantastic and unbecoming form, can never appear to our fair country-women worthy of imitation, yet as they may feel some curiosity respect the decoration fo the French belles, we have engaged a correspondent, on whom we can rely, to furnish us with a correct account of the Parisian fashions, which shall appear every other month.” Curiosity without imitation? I wonder…

As these accounts from France run several pages in length, I won’t reproduce them here (although I will mention the “fashionable colors for the month”: “dark brown, yellow shot with green, crimson, the darkest bottle green, celestial blue, pale lavender, and that incongruous mixture, green and orange shot”).

What were formerly called “needlework patterns” are in this second series termed “muslin patterns.” Here is January’s: 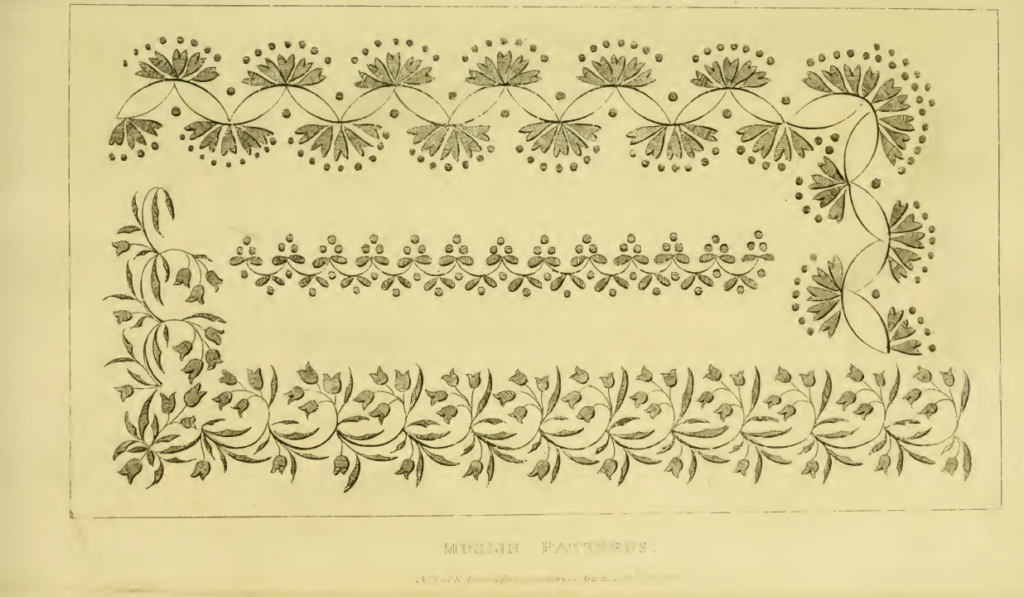