I’m intrigued by the hat in the first of this month’s fashion plates, described as an “Oldenburg bonnet.” I’d never heard of such a bonnet before, and began searching for hints about where the name may have come from. I found mention of Her Imperial Highness, the Grand Duchess of Oldenburg, the mother of the current King of Prussia, Alexander, who visited England in March of 1814, in Edward Seymour’s History of the Wars Resulting from the French Revolution (1815). Seymour reports that the Grand Duchess, “impelled by an insatiable thirst for knowledge, was continually engaged in visiting those objects of curiosity more particularly calculated to enlighten the mind” (Vol. II, page 450). Her visits included two to Oxford University; one of those visits was commemorated in this print, now at the British Museum: 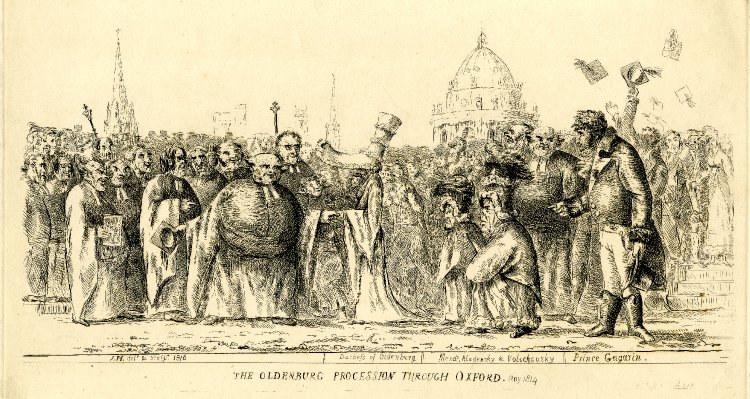 As you can see from the above print, the Duchess wore a quite distinctive hat. The new style bonnet, in vogue for several years after the Grand Duchess’s visit to England, is described in The Habits of Good Society (1863) as “nothing more or less than a coal-scuttle in straw, and turned up around the brim; it was tremendously warm to wear; and caricatures were drawn at the time showing a gentleman’s difficulties in making love to his inamorata, whose face was enclosed in the Oldenburg bonnet” (187).

Ackermann’s version is not quite so extreme as the Duchess’s, but it still keeps the face quite hidden: 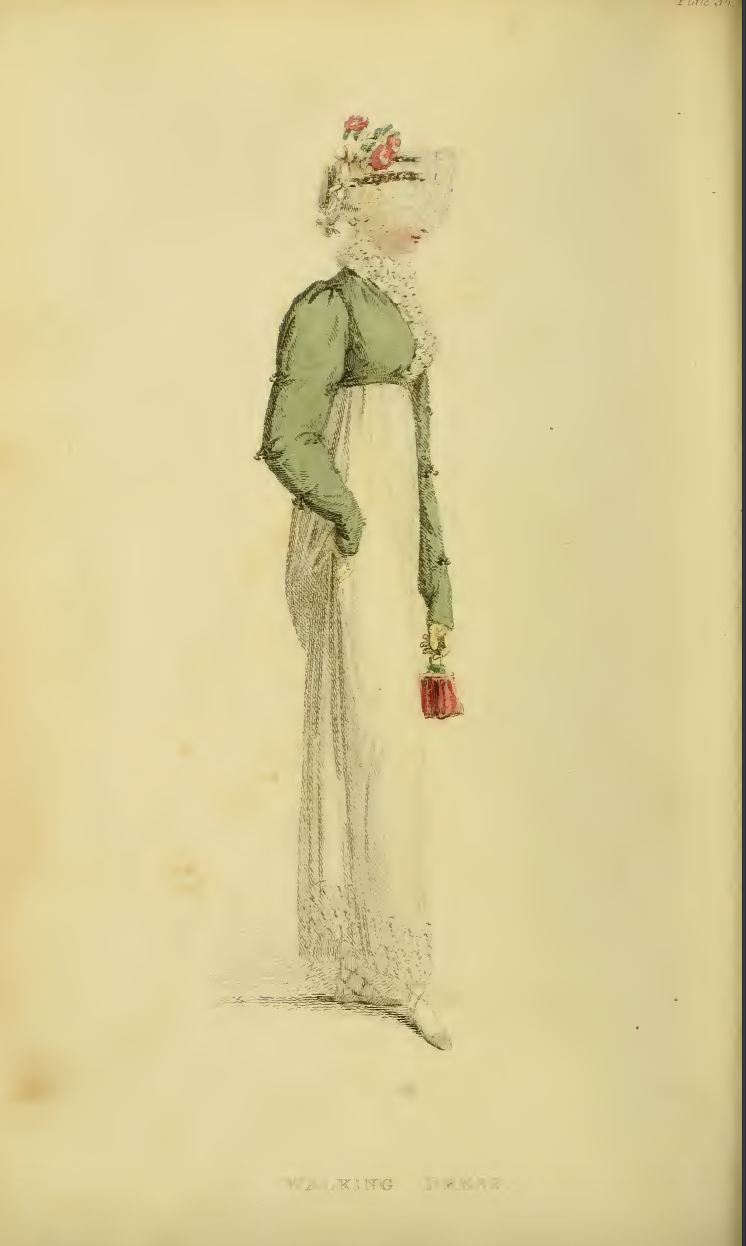 No such hiding for the lady in Plate 37, “Full or evening dress.” Her gown is cut quite low in the back, and adorned with silver beads down the back seams of the bodice, an ornamentation I’ve never seen before in a Regency-era fashion plate. Have you? 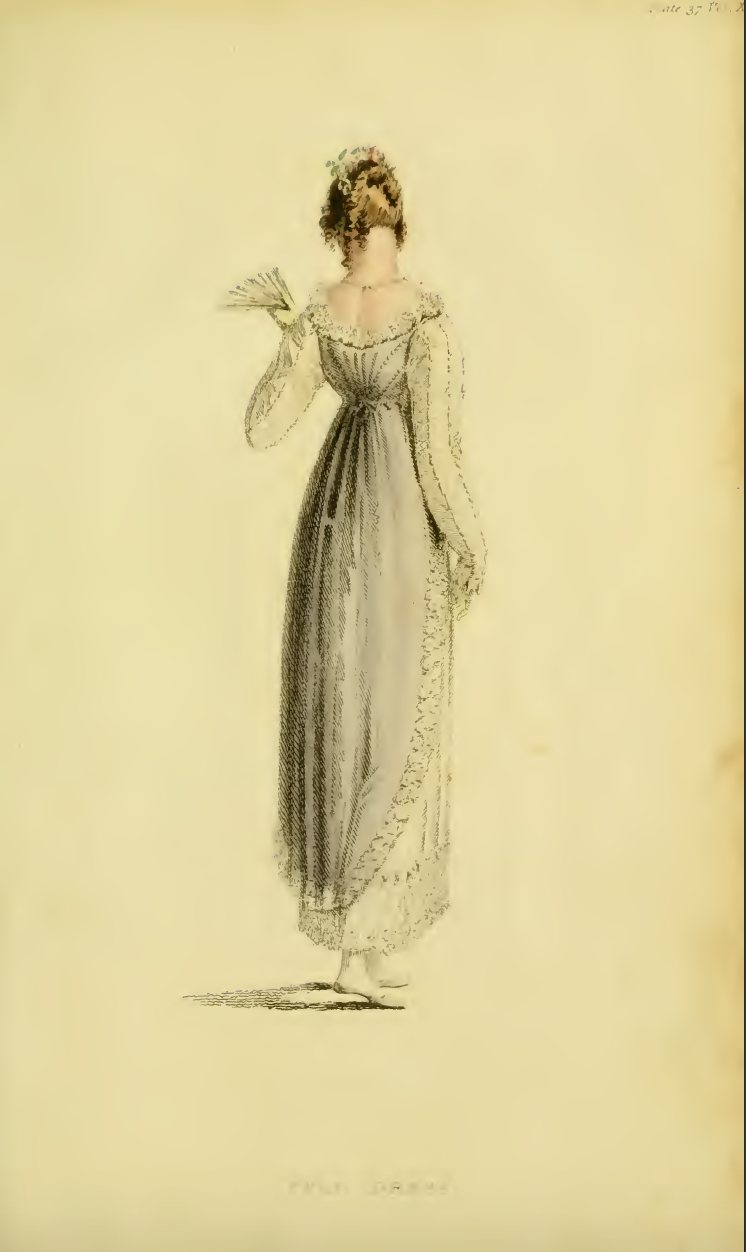 I’ve also never seen sleeves decorated in the fashion show here, either. They are described as composed of “tull or silk net and white satin, with four drawings of easy fullness, lengthwise on the arm, severally edged with silver beading, and terminate at the wrist with a silver Vandyke fringe.” I wonder if the length-wise ornamentation made for difficulties in bending one’s elbow?

The lady’s tunic is described as “evening primrose colour,” but looks more like a lavender to my eye. Perhaps the plate’s original color faded or underwent some chemical reaction? 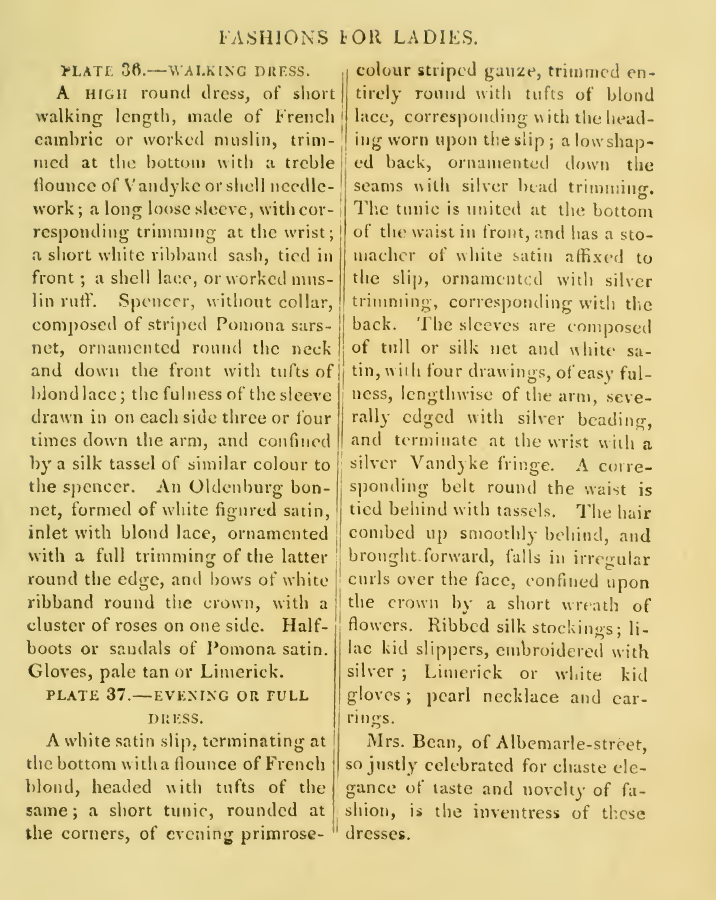 Last month’s fashion for fleur de lis continues in June’s fabric samples: see #2, an “elegant printed marcella for gentleman’s waistcoats, remarkably appropriate to the season, and peculiarly adapted by the fleur de lis by the present circumstances of the times.” 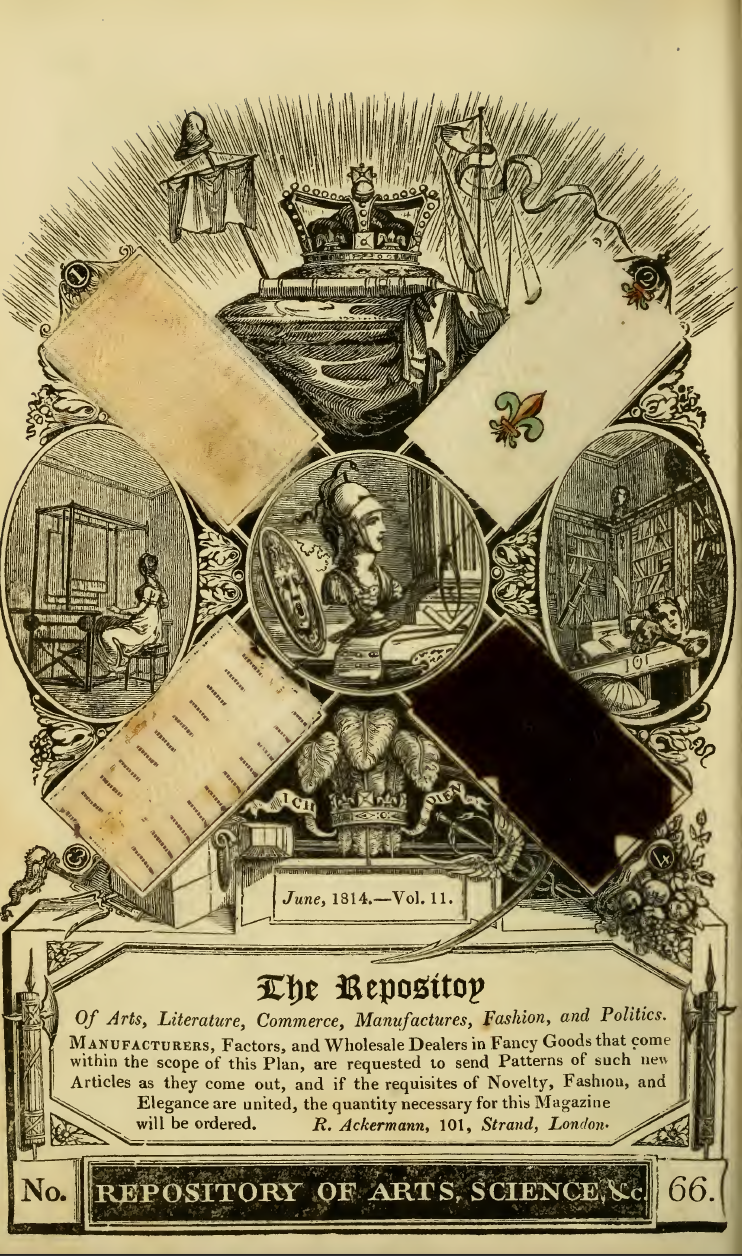 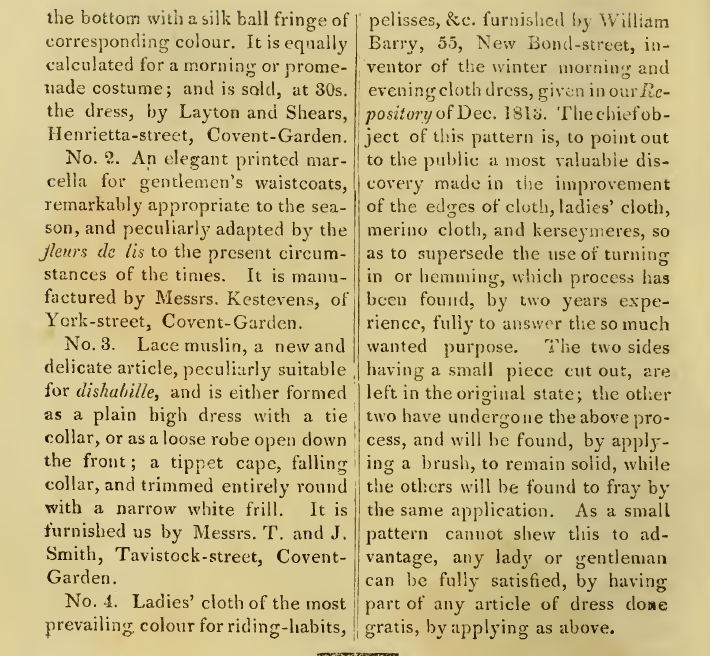 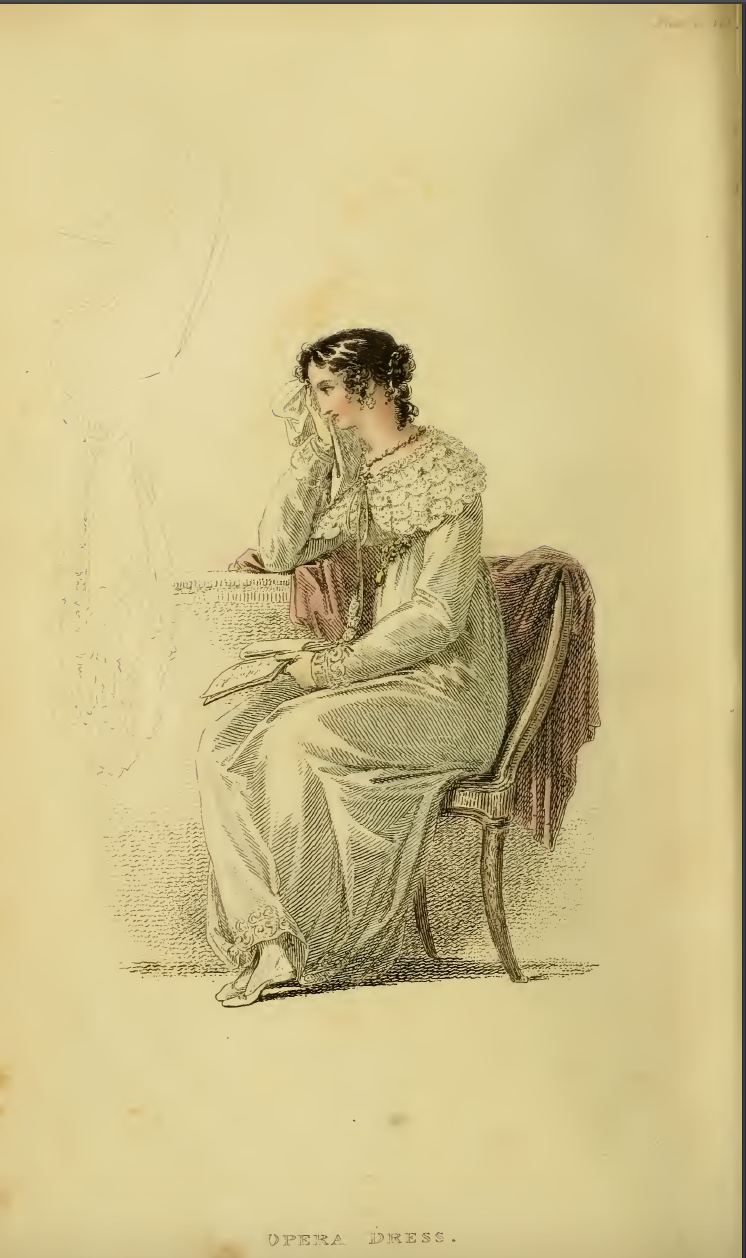 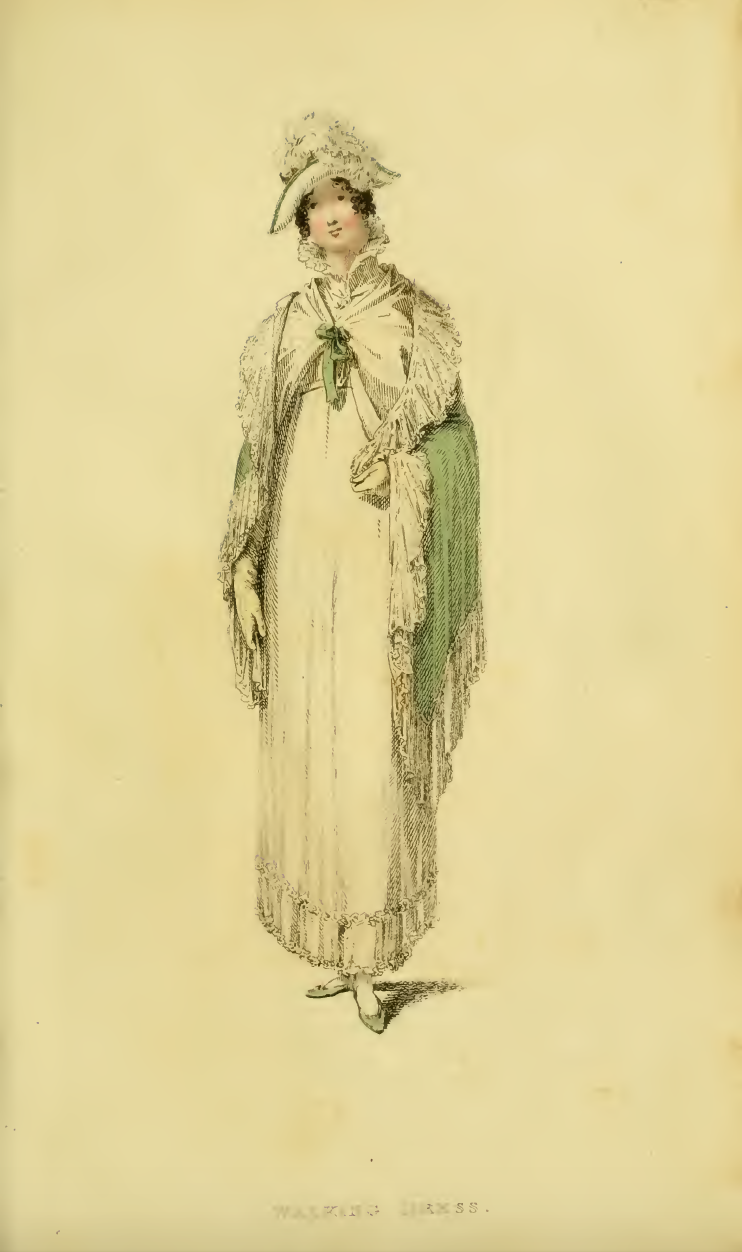 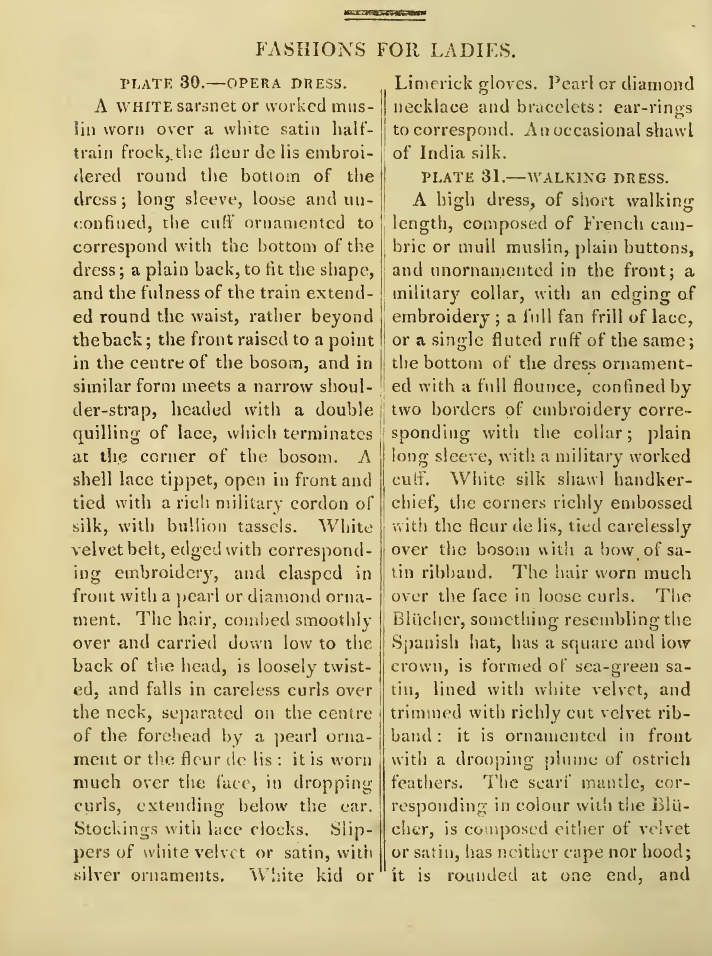 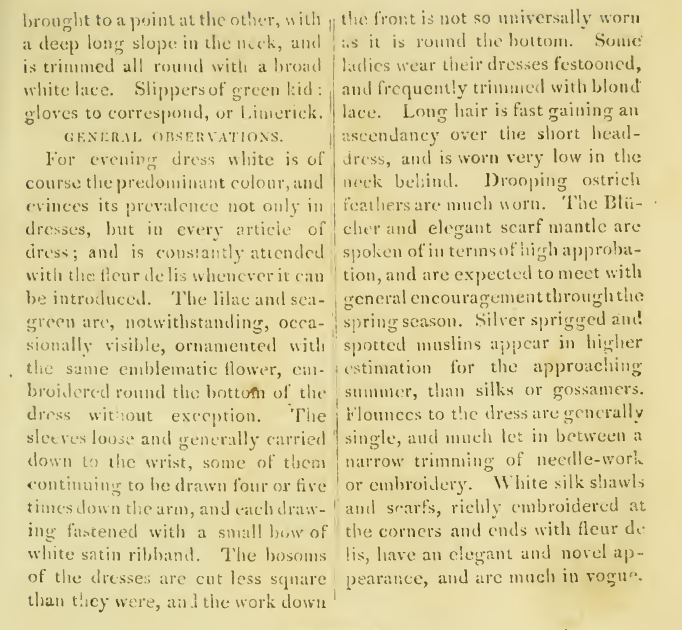 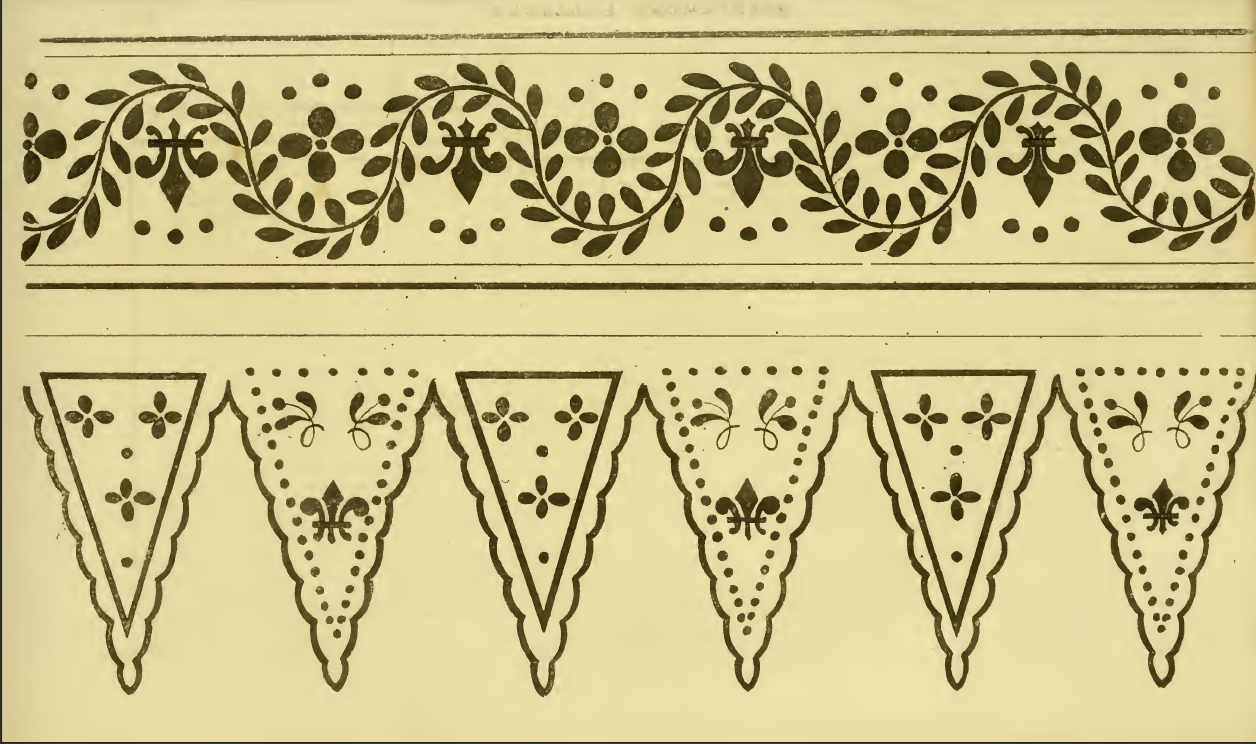