Fascinating General Observations in this month’s fashion plate commentary by Arbiter Elegantiarum, condemning any female fashion that bears a resemblance to the dress of men:

“However ambitious of conquest the fair may be, they cannot expect to attain their object by inspiriting beholders with terror. Modesty and loveliness are their legitimate weapons, retreat and ambuscade their chief military manoeuvres. . . . ”

But AE goes on to enforce gender codes beyond simple fashion:

“I know there is a race of Amazons in the present age, the Lady Diana Spankers of the present day, to whom all this would appear the height of absurdity. To rival, not to captivate, men, is the aim of these heroines; but they will, I am sure, never find admirers or imitators amongst those who are distinguished for sensibility or intelligence.”

Lady Diana Spanker is a character in the children’s story “Mademoiselle Panache,”  by Maria Edgeworth. Edgeworth describes her as a “dashing, rich, extravagant, fashionable widow” whom her main character, a coquette, uses as a foil to make herself look more appealing. Lady Di’s “masculine intrepidity and disgusting coarseness” would likely be familiar to readers, as Edgeworth’s Moral Tales were hugely popular in the period.

Clothing for the beach is certainly different now than it was in the Regency, isn’t it? 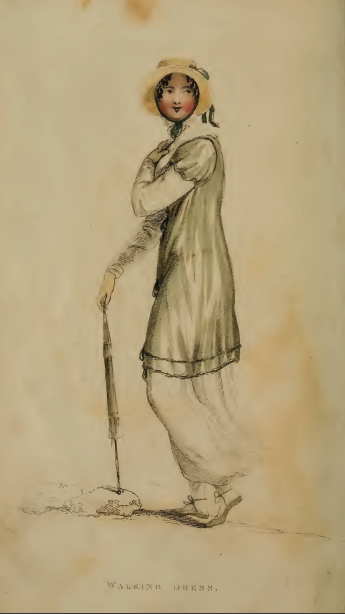 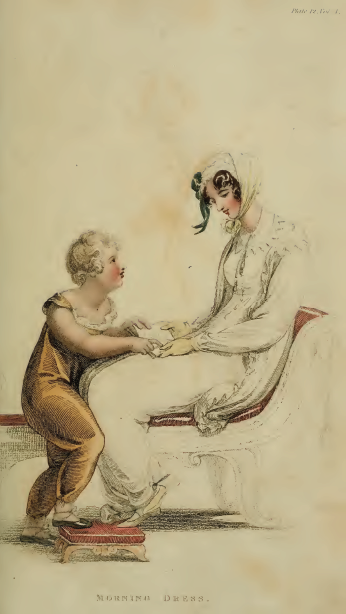 August’s fabric samples include another colorful chintz for furniture, and a “leno,” which Fairchild’s Dictionary of Textiles tells us is “a fabric made with a leno weave” ; “leno weaving” is “a weaving process in which warp yarns are arranged in pairs,” giving an strength to open weave fabrics. Here’s a picture of a modern weaver’s leno wall hanging: 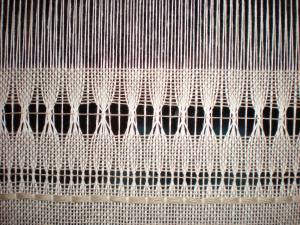 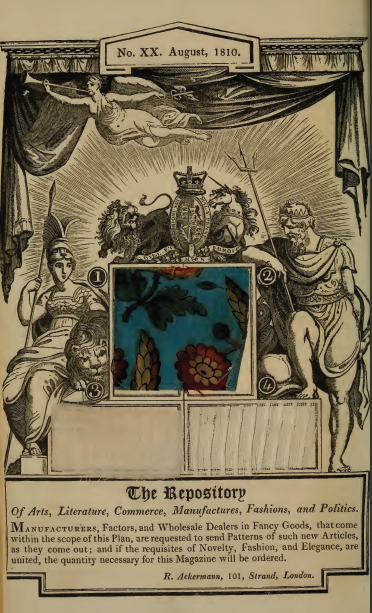 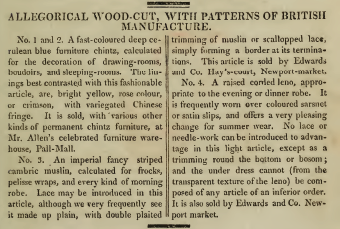 Volume 4 of Ackermanns opens with a sumptuous ball dress, one that sports a rather short hem—so that we could see those fabulous spotted shoes? I wonder how the “pink foil” spots on the white satin of the shoes was stuck on? And does anyone have any idea what the heck it is that the woman is leaning on??

The three ladies purportedly taking the air in Kensington Gardens look ready for a cloudy, showery day, rather than for a hot summer stroll. The post uses the word “ridicule” rather than the more familiar (at least to us) “reticule.” I wonder which word was more popular at the time?

I have no idea what an unella veil is; couldn’t find a listing in Fairchild’s Dictionary of Textiles, and a Google search just turns up a character on Game of Thrones. 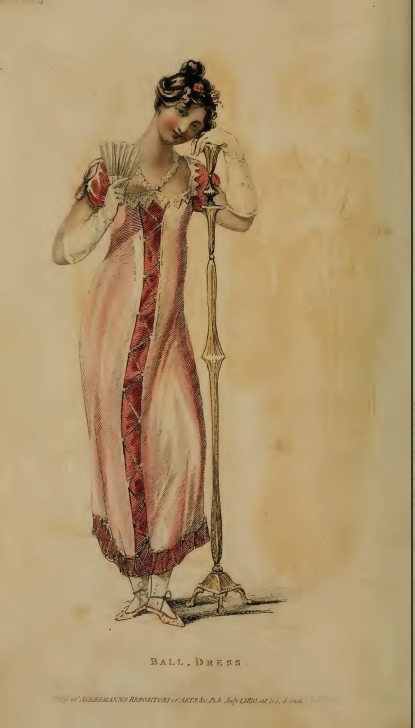 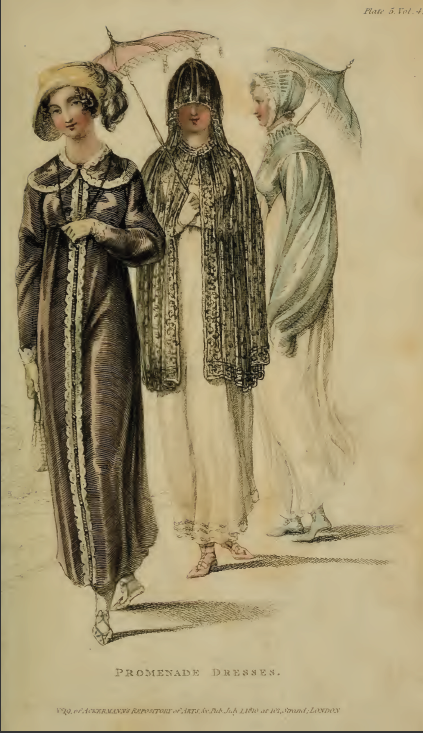 In the general observations, Arbiter Elegantarium bemoans the introduction of “stiff stays and long waists,” particularly among “the middle and lower classes of society”: 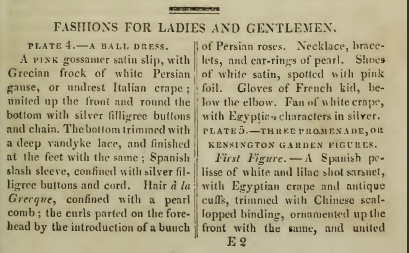 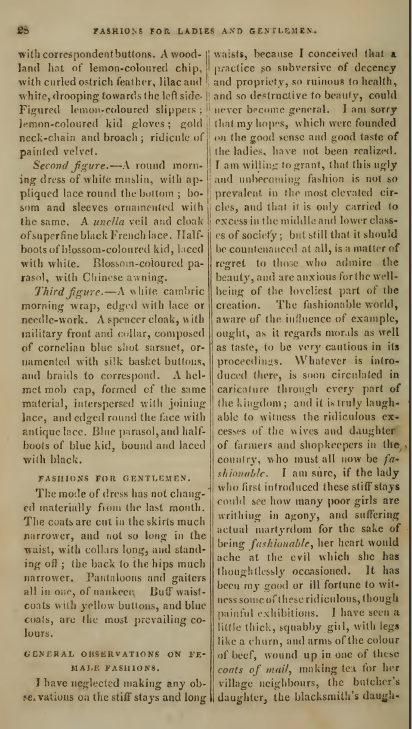 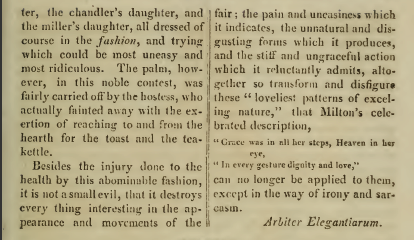 Comments on this month’s fabric samples include a long footnote about British muslin being falsely marketed as India muslin, and puffs for the new “establishing of the warehouse by Mr. Millard, in Cheapside” “as the India goods there are sold direct from the India warehouses.” Wouldn’t want the India Company to lose their revenue, would we, fashionable ladies? 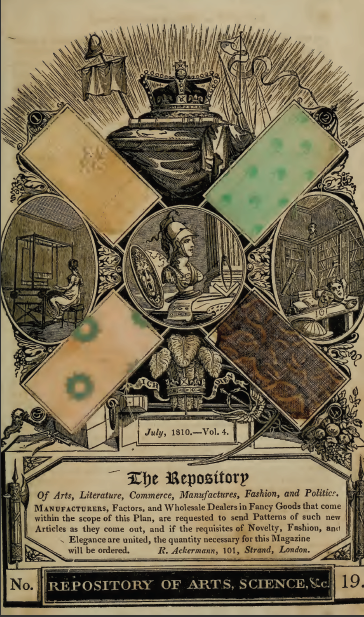 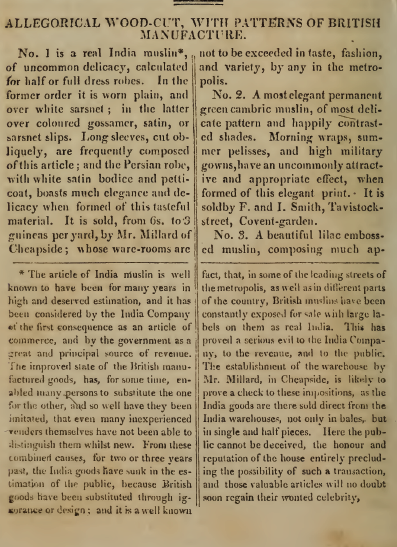 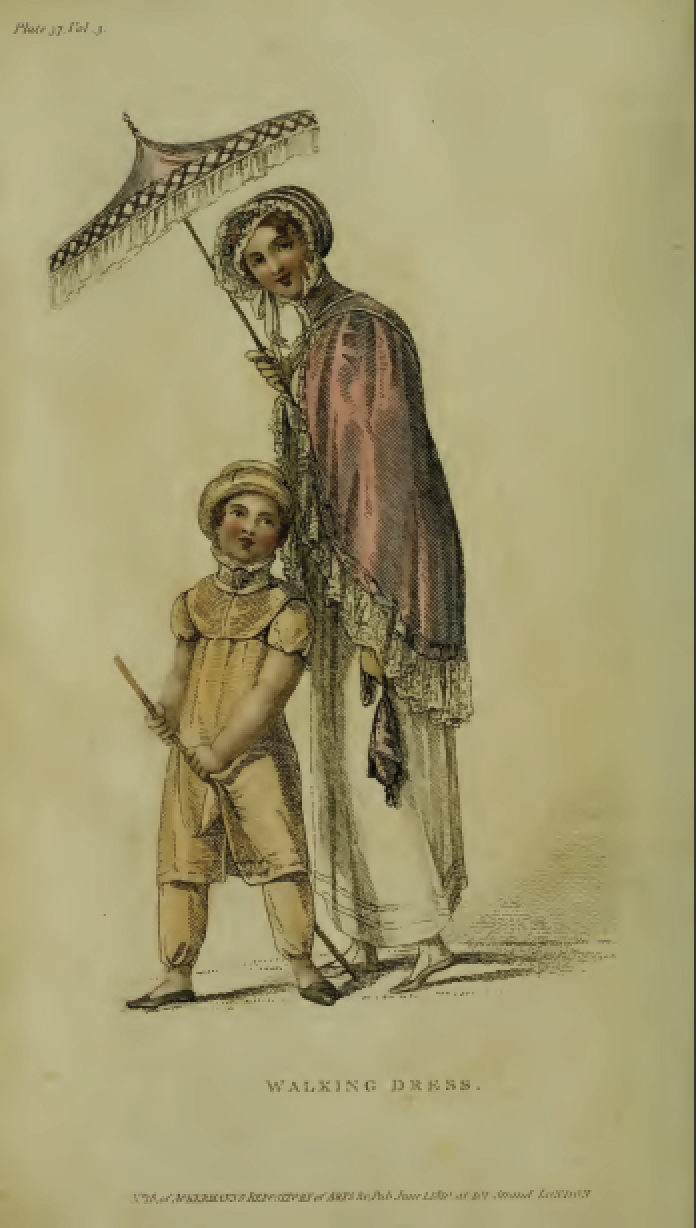 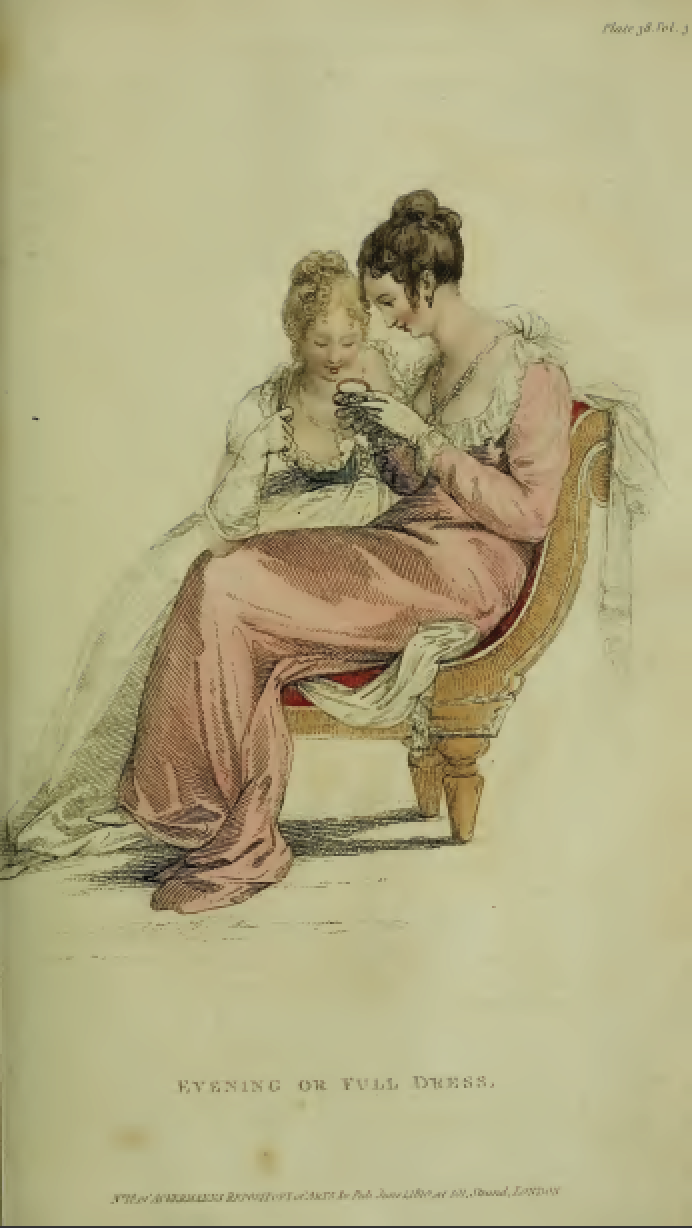 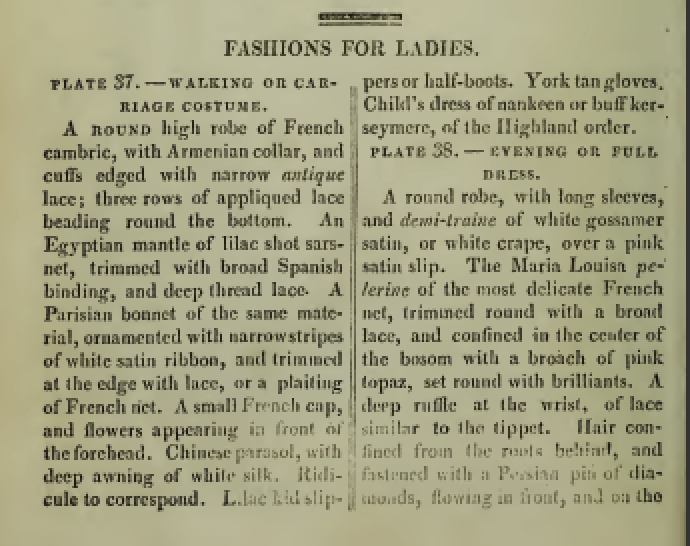 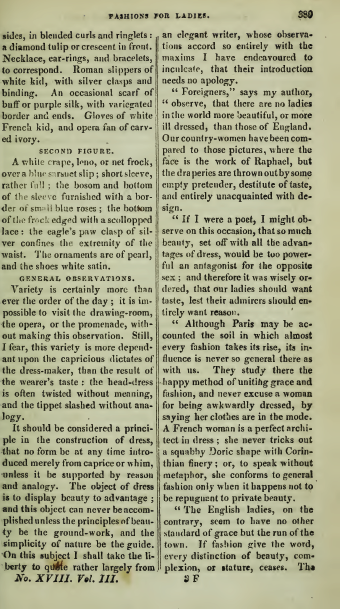 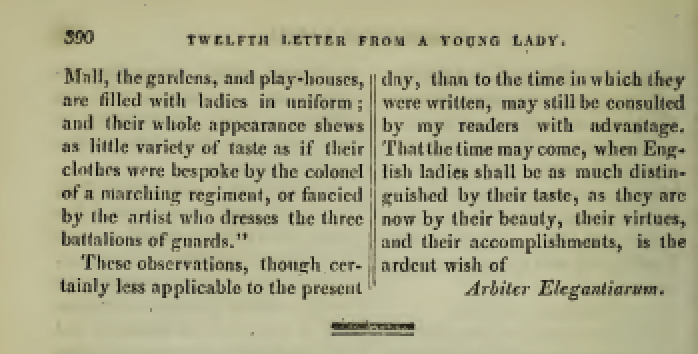 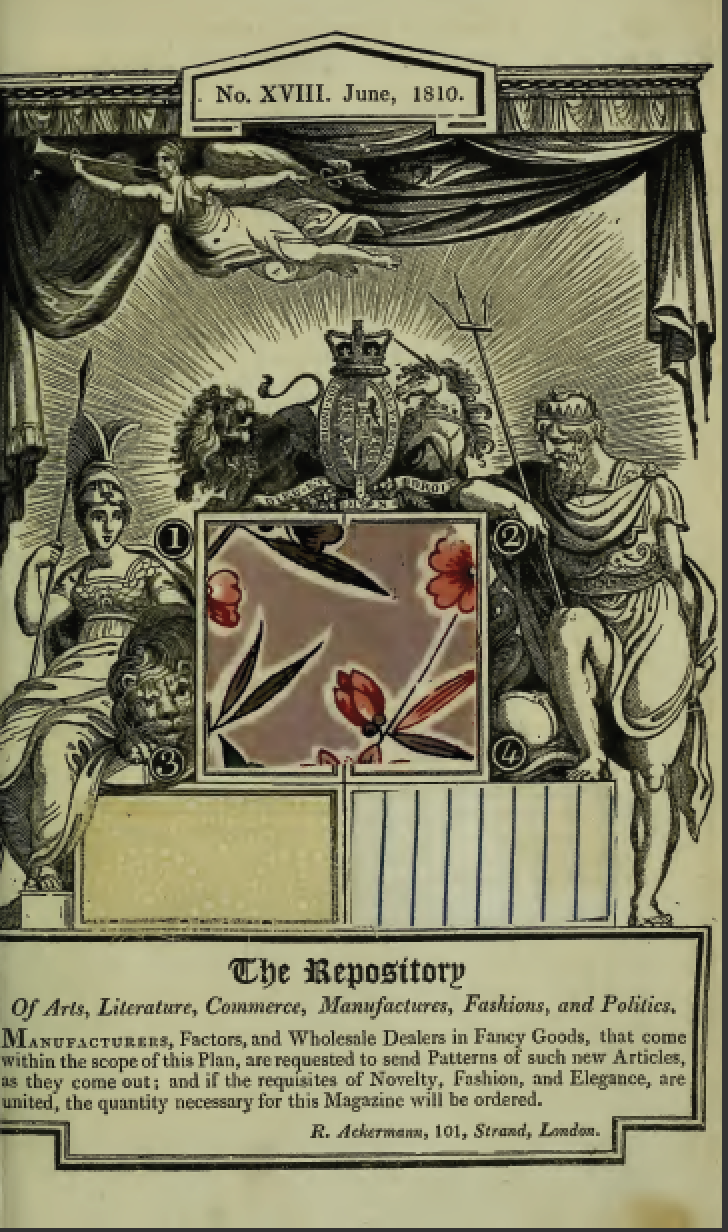 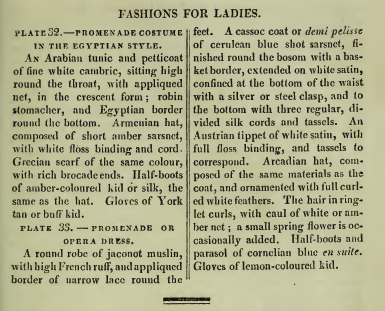 This month’s theme is cosmopolitanism. The two fashion plates, both of promenade costumes, feature fashions from multiple countries around the globe. The first plate, labeled “In the Egyptian Style,” looks like something a traveler to the Middle East might wear, don’t you think? Visually, the second is far less obviously geographically situated, but its description features a “high French ruff,” a “cassoc coat”, an “Austrian tippet,” and an “Arcadian hat.” Though the hat’s adjective in all likelihood refers less to the headgear’s provenance and more to its overall rural or rustic feel . . . 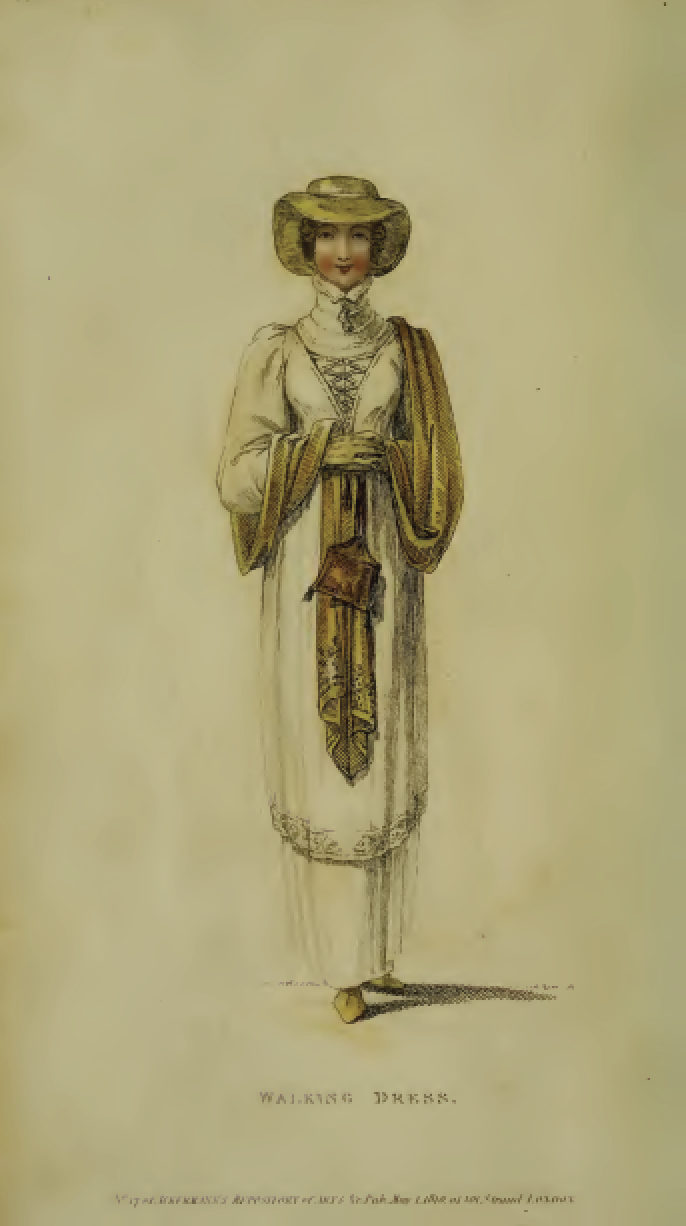 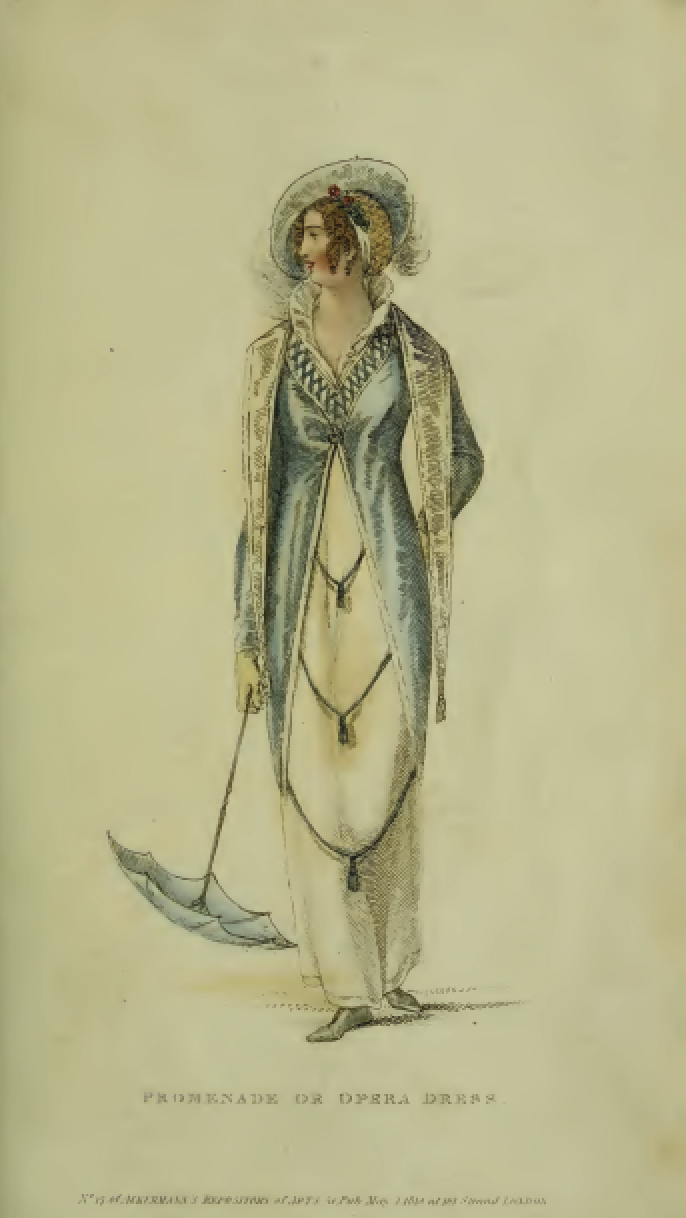 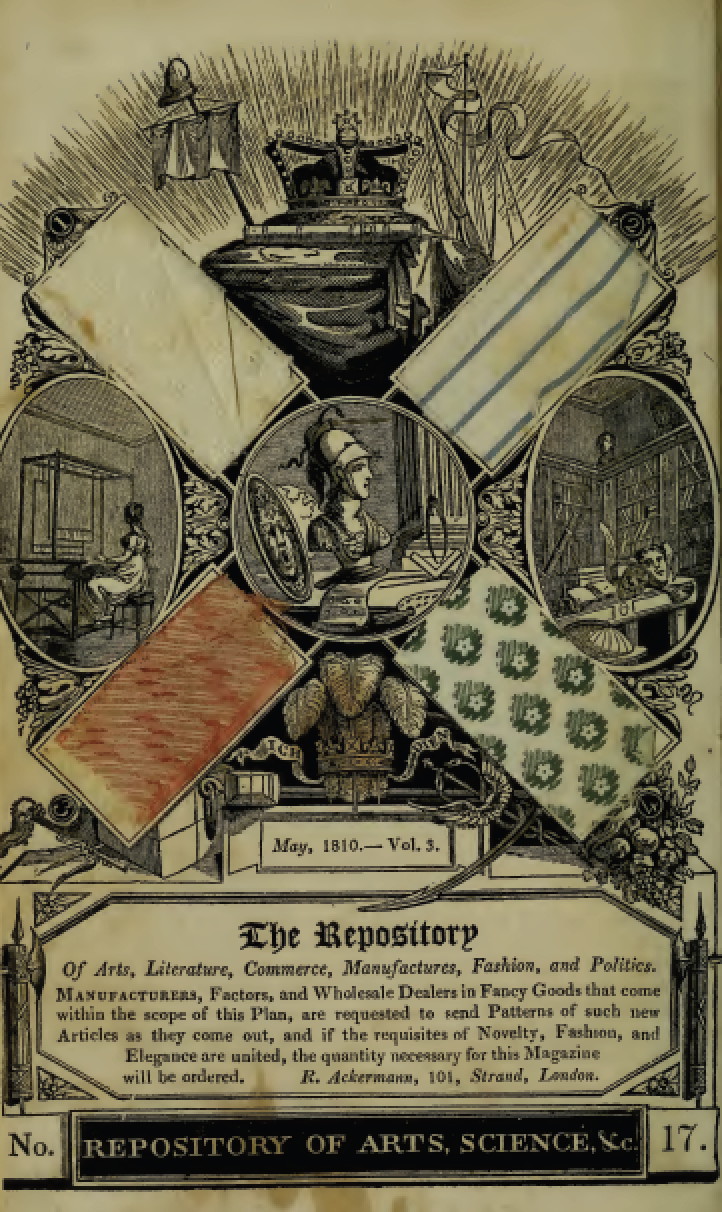 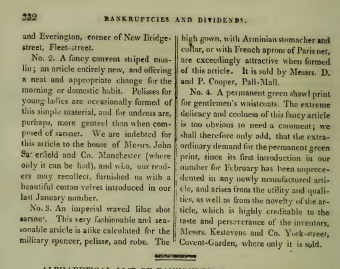 So excited to share the cover for the second book in The Penningtons series, A Man without a Mistress: 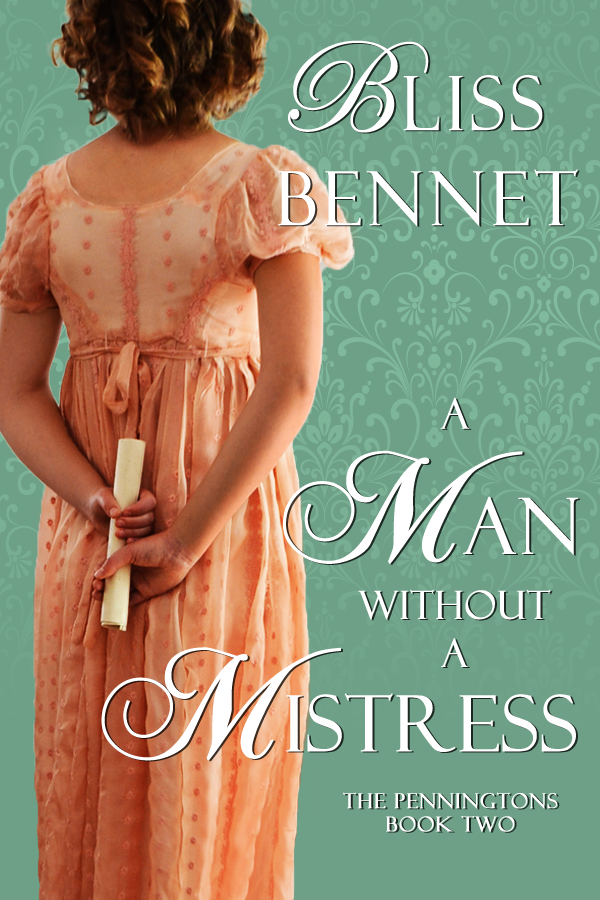