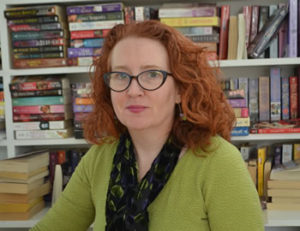 Bliss Bennet writes smart, edgy novels for readers who love history as much as they love romance.

Despite being born and bred in New England, Bliss finds herself fascinated by the history of that country across the pond, particularly the politically-volatile period known as the English Regency. Though she’s visited Britain several times, Bliss continues to make her home in New England, along with her husband, daughter, and two monstrously fluffy black cats.

1 She once sewed a set of short stays and a Regency ball gown completely by hand, French seams and all!

2 Her hair really is naturally red (or at least it used to be, before it turned prematurely gray…)

3 She can’t stop going to school: even with a BA from Yale, an MA from the Center for the Study of Children’s Literature at Simmons College, and a PhD from Brandeis University, she keeps signing up for more classes (quilting classes, writing classes, RWA University classes…)

4 As an early adolescent, she was an avid reader of Harlequin Romances, but gave them up after her college Women’s Studies classes helped her understand why she found them so fascinating yet so appalling (sexist alpha heroes, anyone?)

6 She was a long-time Red Sox fan—until they won their second World Series. What fun is there in rooting for the winning team??

7 Twelve of her ancestors were passengers on the Mayflower, including John Howland, the pilgrim who fell overboard but was rescued

8 Best birthday present ever? A hot-off-the-presses copy of the two-volume Historical Thesaurus of the Oxford English Dictionary (can you say language geek?)

9 Her mild-mannered alter ego, Jackie Horne, muses about genre and gender on the on the Romance Novels For Feminists blog.

10 She’s quite shy, and more than little introverted, but she’d still love to hear from you! To contact, click here