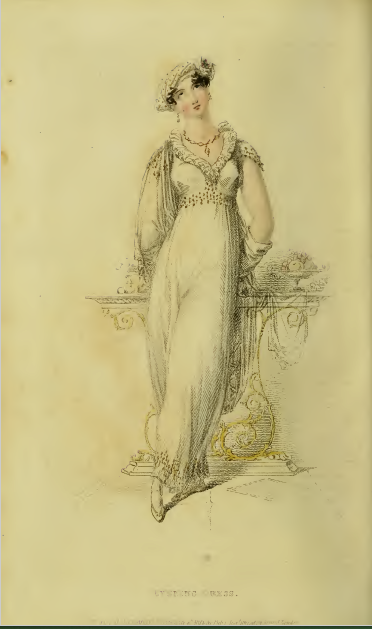 August means summer, and summer means white, at least for the ladies of 1812. Both evening and promenade dresses in this month’s fashion plates feature that color, although the evening gown is of crape, while the walking costume is of jaconet or imperial cambric muslin.

The evening dress is described as having “Circassian sleeves,” term with which I was not familiar. So I went web searching…

Elizabeth Lewandowski’s The Complete Costume Dictionary defines “Circassian sleeve” as “Director and First Empire (1790-1815 C. E.). Worn by children in 1807, short sleeve that looped up in front” (66). But the sleeves in this Ackermann’s plate (or at least one of them, since the sleeve on the right is covered by a scarf) look to be short and triangular, with a tip pointing down toward the elbow.

Sarah at Sarah’s History Place suggests that the phrase “Circassian sleeve” has been used during different points in the Regency to describe very different types of sleeve. A 1790s reference features a three-quarter-length sleeve (which was an innovation at the time), while an 1807 mention in the October issue of La Belle Assemblée features a child’s dress with short, straight sleeves. None mention a triangle or a point.

The Circassian sleeve may just have to remain a mystery… 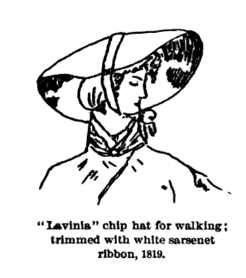 And so might the “Lavinia hat” worn by the promenading lady in Plate 12. Amelia Mott Gummers’ The Quaker: A Study in Costume reports that a ” ‘Lavinia’ unbleached chip hat, trimmed with white sarcenet ribbon, was shown in 1810″ (202). The accompanying picture of said hat does not look much like the one in Ackermann’s though: 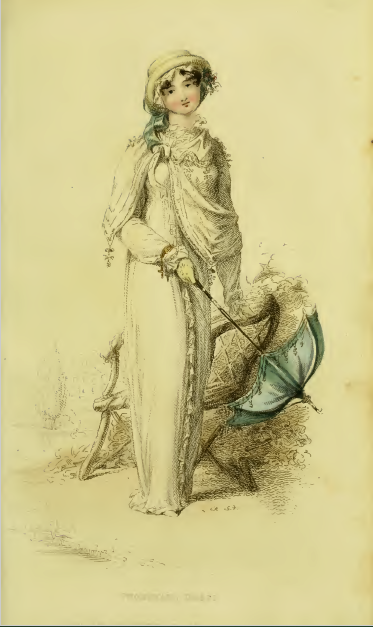 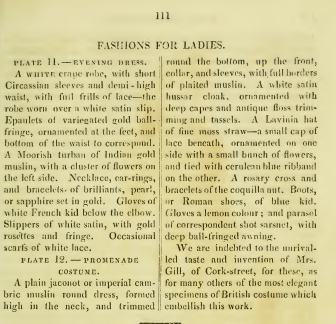 Forgot to include the fabric samples in last week’s post: apologies! August’s fabric samples, like this month’s fashion plates, contain their own share of mysteries. Sample one is described as a “veletine”—a misspelling of “velvet”? Or of “velline,” which Fairchild’s Dictionary of Textiles defines as a “a winter-weight woolen coating with curd pile surface; made in France”? Neither seems quite right for summer wear, although the description reports that the fabric is “adapted principally for the pelisse and spencer.”

The photograph of the sample, alas, is quite hard to see, but I can just make out a small pattern in the light blue, which seems to be in the weave of the fabric itself. 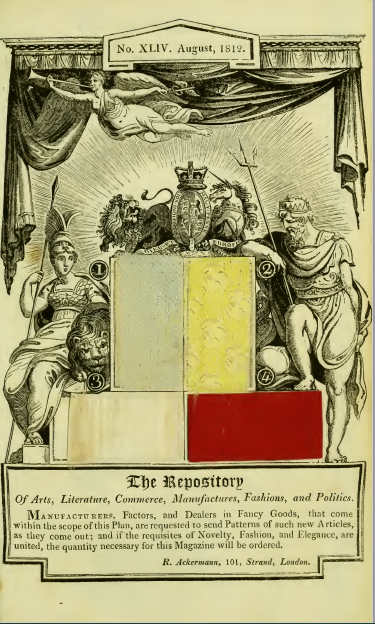 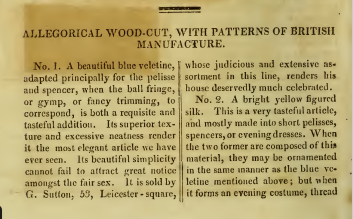 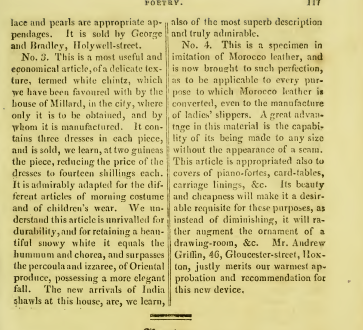 Sample 3, described as “white chintz,” is favorably compared to “hummum and chorea” as well as to “percoula and izzaree, of Oriental produce.” Fairchild’s Dictionary of Textiles tells us that “hummus,” or “humhum” is a “coarse, East Indian cotton fabric made in solid colors.” But the other types of cotton are a little harder to place. “Percoula” could be a synonym for “percale,” while “izzaree” could refer to “izarin,” “an obsolete, Indian cotton fabric” (291). But “chorea” is a complete puzzle. Any guesses?

The final mystery is in sample four, “a specimen in imitation of Morocco leather.” But Mr. Andrew Griffin, the purveyor of this “specimen,” does not mention of just what this imitation leather is made. I for one am quite curious. Too bad his shop in Hoxton is no longer in business…