Not Quite a Marriage

Book 1 in The Audacious Ladies of Audley series 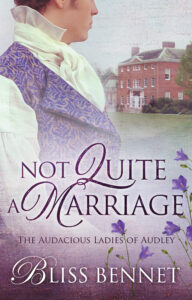 A rebellious viscount returns to England determined to prove his worth to his long-estranged his family, but the shy mouse of a woman he was forced to marry is equally determined not to forgive or forget…

Spencer Burnett, Viscount Stiles, once swore he’d left England for good. Yet after five years of self-imposed exile in West Africa, he’s no longer the same spoiled, selfish boy who ran away from a domineering father, a disappointed grandmother, and a decidedly unwanted wife. Proving himself to the family he abandoned will be no easy task, but Spencer no longer shies away from a good fight. He hardly expects his formerly docile wife will be the hardest to convince. When Philadelphia refuses to accept his apologies—or to allow him back into her bed—Spencer finds himself tempting her into a bargain he cannot afford to lose.

Philadelphia Burnett’s desires were once as vast as the sky. But now, after suffering one devastating loss after another, the only thing she allows herself to want is a home. So when her estranged rake of a husband returns from a five-years’ absence to claim the estate promised to her, Delphie resolves to fight him every step of the way. Beechcombe Park will be a sanctuary for her, and for the wayward Audley cousins she’d promised her sister she’d always protect. She cannot, will not, suffer even one more loss.

Especially not the loss of her heart…

• The Sources of Not Quite a Marriage